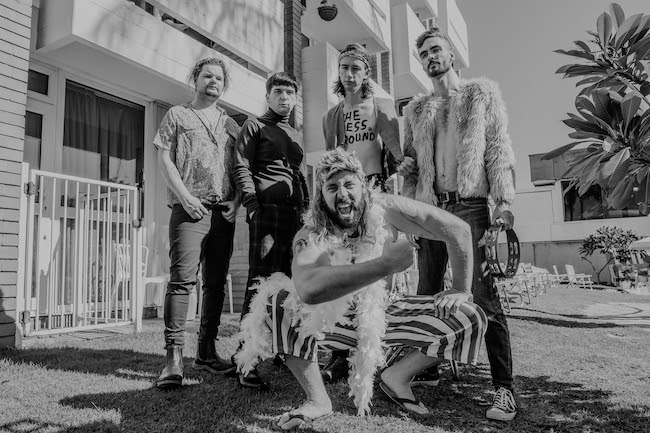 The band is currently located in the most isolated (and beautiful!) city in the world, Boorloo/Perth, Western Australia.
How did The Mess Around form?
The Mess Around were formed in the depths of the pandemic by founding members, Alex Ford (Drums), Chris Dyson (Guitar) and Joel Bradbury (Vocals). The three founded the group based on their love of Surf Rock, Australian Indie and 1990s Grunge Rock. After some lineup changes Cian Moore (Bass) and Luca Bonini (Guitar) joined to round out the group in late 2021 providing not only chaotic youthful energy, but also rhythmic drive and harmonic thickness.
What’s been happening recently?
Recently the boys have departed on their WA “Kings of the South” tour on the back of their latest single release “Still Broke” hitting towns such as Mandurah, Margaret River and Esperance just to name a few. Being their first time playing shows outside the Perth Metro area, they are stoked to be bringing their unique brand of surf rock to WA music lovers across the state’s picturesque south west. On top of this the boys have been spending their time whilst at home in Perth to continue to record and write the music that fans have come to know and love.
Your latest single ‘Still Broke’ is out now, what influenced the sound and song writing?
“Still Broke” tells the story of a wild time out and about on a long hot Aussie summer night. Influenced by the hectic nature of the Aussie summer and arvo BBQs that turn into sunset beach sessions, that then turn into nights out on the town and watching the sunrise from the roof of your mates 4×4. The group attempted to capture the instant nostalgia of a great time had around great people. Verses spill into choruses that then open out into a signature Mess Around bridge section before then diving back into a final outro to tie it all together. It is this dynamic flowing nature that allows the listener to feel lost inside a good time, just as you so often are when trying to wrangle the larrikins we call friends on a night out.
How did you go about writing Still Broke?
As with a lot of the band’s music “Still Broke” started from riff powerhouse, guitarist Chris Dyson. Often he’ll come into rehearsal sessions with a smattering of riffs that the boys can choose to jam on, and the boppy chord progression that sits under the song’s melodic lines was what happened to be on offer. From there singer Joel found his way through the song’s catchy melody lines (paired with crass demo lyrics about farts and balls) whilst drummer Alex and bassist Cian locked into a groove tighter than an atomic bond. All that was left was for Luca to lay down his signature lead lines and backing vocals and the song began to really rock. The group chose to have the lyrics performed in a “call and response” style in the chorus to signify the mateship that the song attempts to portray, whilst verses remain sparse although dripping with reverb allowing the listener to soak in the lush harmonics of the tune.
Where and when did you record, produce and master?
As with a lot of The Mess Around’s music, what you’ll find recorded on Spotify will stay faithful to what is played live, so in terms of production the band aims to be able to perfect the structure and arrangement of songs in their rehearsals to deliver audiences thoughtfully crafted music – that can then be listened to on repeat wherever they stream their music.
As for recording, our incredibly talented drummer Alex handled the engineering and tracking as each member played their part and was able to beautifully capture the sonic landscape of the song and its beachy intentions.
Once happy with the tracking we then sent it through to good friend of the band, and sound wizard, Jay Huxtable over at Oracle Sound. he mixed and mastered the hell out of it, providing the finishing touches that gave this song its raw surf rock goodness.
Who are you listening to at the moment?
Some local bands we are enjoying include Surf Shop Cops, Reef Eater, Moth Street Artists, Drowse, Solar Juice, All Day Breakfast Club and Sunny Flowers.
Some national/international acts we love are Spacey Jane, Tyler the Creator, Jane’s Addiction, John Mayer, Powder Finger, R.E.M, King Gizzard and the Lizzard Wizard and Ocean Alley.
What do you like to do away from music?
The band have a very diverse set of interests outside of music. Joel and Luca are avid sports fans and are often found playing tennis, basketball or kicking the footy. Alex, Chris and Cian prefer the comfort of home and enjoy playing classic video games and building computers. Of course all the boys enjoy hitting up local venues and watching the best live music WA has to offer!
What’s planned for the remainder of 2022 going into 2023?
2022 began for the band as a period of writing some of the great tunes such as “Still Broke” and “Balance” that have since been released out into the world for all to enjoy. Since then the boys began a period of heavy gigging which ramps up with their “Kings of the South Tour” from August to October of 2022. After that you can expect to see them writing and recording down at Oracle Studios once again working hard at what they love to do. 2023 will hold much more time spent in the studio for the group and who knows, maybe even a trip across the desert to visit their neighbors to the East ;).
Favourite food and place to hangout?
As a group the boys will always go out for Burgers and Mexican, and then head to the closest dive bar to soak in the sights and sounds that the local scene has to offer.
https://www.instagram.com/themessaroundofficial/
@themessaroundofficial
The Mess Around
0 comment 0 FacebookTwitterPinterestEmail