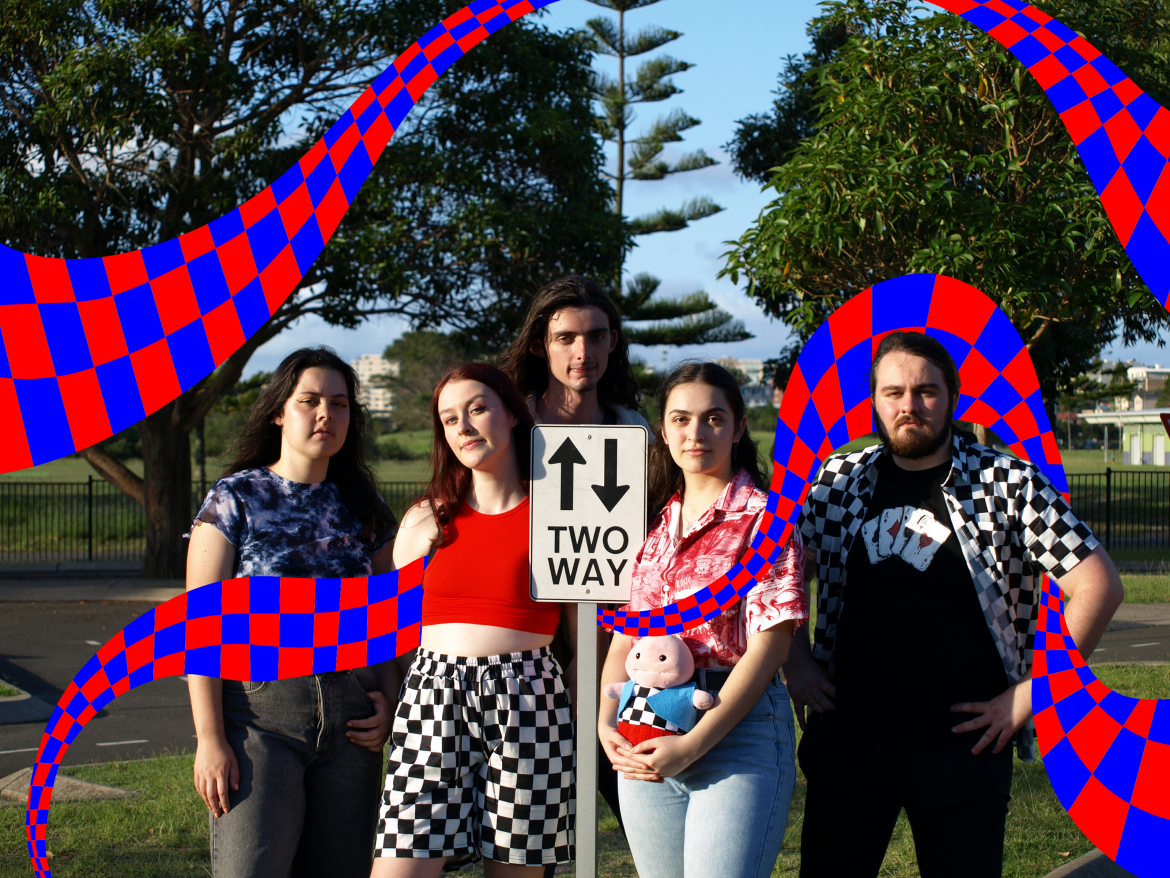 Riley: We’re all from South Eastern Sydney and are mainly playing gigs around the inner west and the city.

Maddy + Riley: We’ve all always been avid music listeners and kind of serendipitously fell into music! Dom began drumming on the wii game Rock Band, Riley started as a drummer and taught himself guitar at 12, Rosalie on ukulele in highschool, Maddy on classical piano and Laura in school choir. We all thrive on music, to quote Riley “I’d go insane if I couldn’t play guitar for a week.”

How did the band form?
Riley: I got a message out of the blue from Rosie in 2019 around the end of year 12. She asked if I wanted to start a band with her and her friend Maddy and I said yes. We started practicing together. Within a few months we had picked up Maddy’s brother Dom on drums and later Laura in 2020.

Your debut single Ok? is out now, what influenced the sound and songwriting?

Maddy: There wasn’t anything specific, but my songwriting in general is massively influenced by Little Birdy, Two Door Cinema Club and Lily Allen. They all have such a unique style and honest, authentic lyricism that I try to mirror in my own writing.

How did Ok? come about?

Maddy: Ok? Came about as a very necessary source of catharsis! I wrote it after being romantically rejected in a really confusing way that I didn’t know how to process, so the song follows a narrative of my own reflective process about the experience. It begins with me invalidating my own feelings and claiming to be ok, but by the end I confess I wasn’t ok and I come to terms with the experience. I brought it straight to the band and ever since it has become a favourite live!

Rosalie: We recorded at Pale Blue Dot with Tim Mcartney and Andy Scott our producer back in November 2021.

How did you approach the recording process?
Riley: At the time only Dom had recording experience so most of us didn’t know what to expect. In preparation we really tried to nail the song and have all our parts written and done, so that on the day things went smoothly. We had a really great producer and engineers who ran us through the process and in the end everything turned out great.

Rosalie: We’re actually quite inept with technology so all technological dimensions were handled by our amazing team Andy Scott and Tim Mcartney.

How was it working with Andy Scott and Tim Mcartney?

Maddy: It was phenomenal!  They are both so professional, diligent and kind. They gave us a great first recording experience and did everything possible to make sure we were happy with ‘Ok?’ We are so honoured to be able to work with them and can’t express enough our gratitude!

You’re a female majority band, please tell us about how this dynamic works:

Maddy: It’s really exciting to be able to diversify the Sydney music scene which is so male dominated right now! We’ve had a lot of positive experiences- girls often approach us and say it’s refreshing to see more female representation. At the same time we’ve also experienced sexism like the time all the girls got catcalled during a performance. It’s definitely challenging at times but rewarding overall.

The band won UNSW battle of the bands! What was this experience like and what opportunities did it bring?

Riley: It was an awesome experience to meet and play with all those great bands, and we got to play on the iconic roundhouse stage which was much bigger than we’re used to! It also got us into contact with Reenie from FBI radio who was generous enough to debut our single ‘Ok?’ on radio. We’ve also been lucky enough to be returning to the Roundhouse for a gig this year so keep your eyes peeled for that one.

Who is your mascot?

Maddy: Our mascot is named Peplum! He is a small tubby pink stuffed animal with his own Instagram handle: @peplumtakesontheworld. You can spot him in our photoshoots or at the front of the stage at gigs. He is omnipresent, a fan favourite and a big part of the band!

Laura: Our preferred genres and artists vary so much between band members and I’d say this is one of our biggest assets when it comes to the creative process. We have a big spread between us- Riley’s lead parts are influenced by American rock like Soundgarden, Dom and I love Arctic Monkeys, Rosalie loves Paramore and Maddy listens to a lot of classical music.

Maddy: We’re all in uni so that takes up time! Otherwise hobbies across the band include swimming, knitting, Mariokart and watching Big Lez on YouTube.

Dom: We’ve got a big year ahead of us! Our merch has just dropped and we’re recording three more singles next month which will be released very soon. Otherwise, we’re keen to continue gigging around Sydney and potentially even Newcastle/Wollongong!

Laura: We love hitting Waterloo Maccas after practice, where we typically dig into a 24 pack of nuggets and some orange juice.

Great to learn more about THE CAUSEWAY!!!!