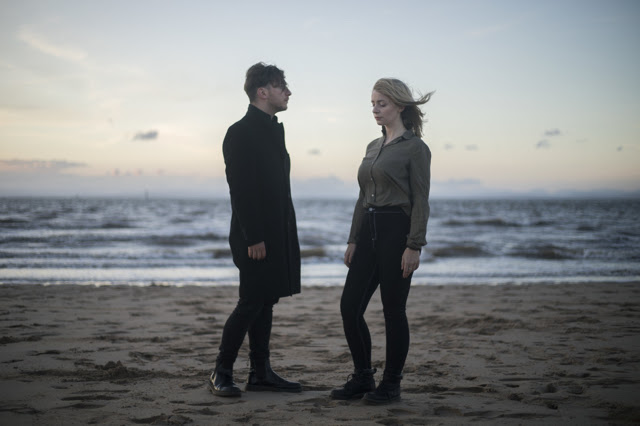 Synth-pop band Koalas are pleased to announce details of a brand new visual for current track, Sandcastles, a post-summer anthem that serves as a metaphor for what the Manchester duo of Samuel Jones and Rachel Waters might do come the final countdown.

Sam explains… “Sandcastles was written as a reaction to a particularly bleak news day, I think it was around the time of the Salisbury poisonings. The song is about the dissonance we experience between our every day lives and the disturbing world events happening around us, the prevailing feeling that everything is a lot more stable than it really is. When discussing with the director the meaning of the song and it’s influences we looked at 1980’s Cold War imagery and in particular the pamphlet “Protect and Survive”; a government guide on what to do in the event of a nuclear attack. The guidelines themselves are extremely ineffectual, and portrayed in the particularly depressing graphic novel/film “When The Wind Blows” by Raymond Briggs which I remember watching when I was younger. In the video Rachel and I attempt to survive the oncoming nuclear annihilation whilst dreaming of a better way to spend those last hours. The living room doors leant up against the wall is something people might recognise from the film, an almost laughable measure.”

Koalas take influence from more electronic artists such as Boards of Canada and Caribou, combined with 80’s pop of Eurythmics and Bronski Beat. The band are part of a new vanguard of artists to come out of the new Mancunian music epicentre, the Low Four studio and record label, based in the historic Old Granada Studios in the city centre and working with producer Brendan Williams (Dutch Uncles, GoGo Penguin, Francis Lung).