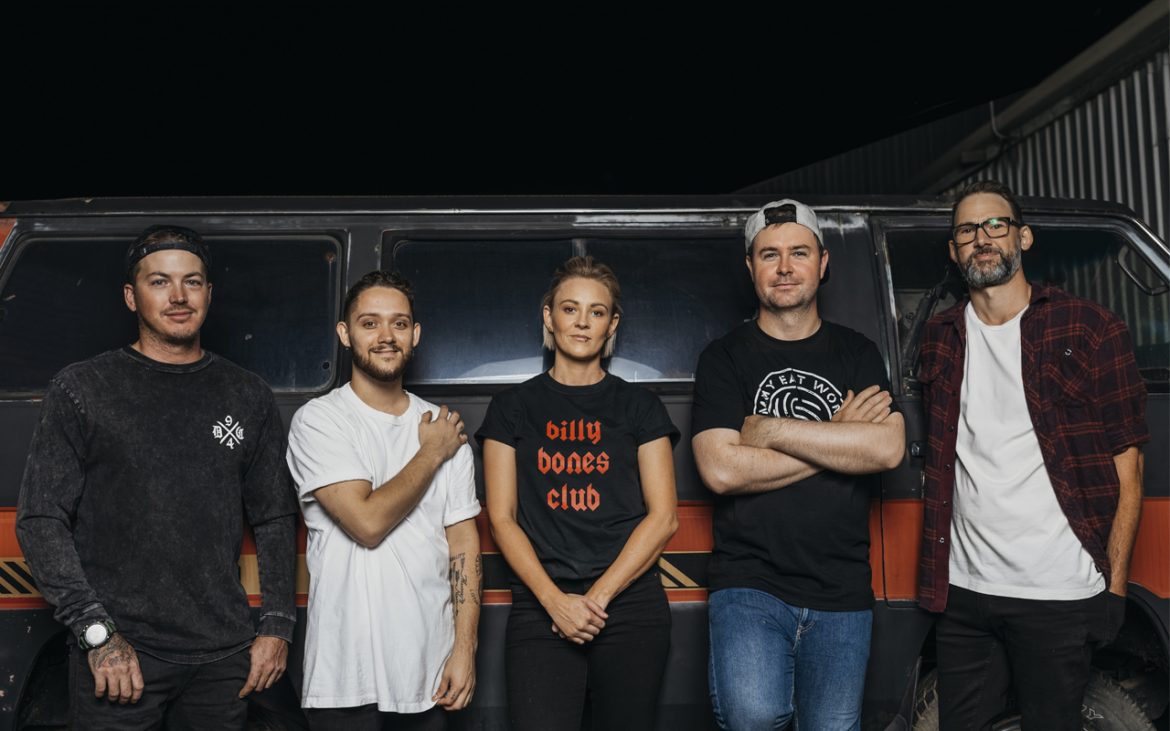 We’re based out of Brisbane.

Ian and I found each other on a musicians website in the classifieds section… they used to be a thing back in the day. We then reached out to other people we knew within our networks to find everyone else. We’ve had 2 new members since forming, but once we all had an obligatory day of hanging out and eating pizza (gotta honor those pop punk roots), that was it. I couldn’t think of a better bunch of guys to be squished next to for hours on end while touring in a disproportionately small car.

Our guitarist Rohan just had his first child, so he’s been learning how to nail Dad jokes and dodge wee in between shows. The rest of us have been doing a bunch of stuff behind the scenes preparing for this release. But now that’s out, it’s back to working on our live show… aka booking a practice room and talking shit for hours, oh yeah… and playing music.

Your album ‘Time To Breathe’ is out now, what influenced the sound and songwriting?

This album is like a time capsule of the past few years. Each of us have really meaningful songs on there, or parts of songs that are real life. Whether that be heartbreak, falling in love… or looking at where you’ve come from or where you might be at – the release is influenced by our lives.

We had taken a bit of a break prior to recording, so we had a fair few complete songs that we’d worked on during that time. We also had a lot of ‘songs in progress’ and random ideas that needed sorting. So we decided to book a writing/pre-production session over a few days with Troy Brady (ex Amity Affliction). He brought a new perspective to things and helped us narrow the list, focus on the good, bin the bad and finalise the outline of the album.

What does this album mean to you?

This album represents a turning point for the band. I feel like we’ve stepped out from the shadow of our youth, and embraced a deeper, more honest side of ourselves. This vulnerability has given us more depth – something we were lacking in before. I know for a lot of us it also represents a release to all of those feelings and situations. It feels good to finally have it out there.

We recorded in Brisbane in early 2020 with Troy Brady as our engineer and producer. Beau McKee mastered the album.

After our pre-production and writing session with Troy, we booked in with him to get to work. We’d already done a lot to refine the tracks, so we really just needed to figure out what our ‘new’ sound would be. It was important that we honored our pop-punk roots, while expanding and modernising our sound. We had a rough idea and a few loose references, but once Troy started recording he really helped bring the album to life.

Please tell us about your single ‘Give Me a Second’ how it came about and what the tracks mean to you?

As a band, our music has always been quite “positive”, with our lyrics usually looking at the bright side of every situation. For this track (and many off the album) we wanted to be more honest and transparent about those less desirable times. Times when you know you’ve fucked up, or feel hopeless and there’s nothing left to do but scream and beg for forgiveness. Nothing but time will help. For me, this song is an expression of that feeling of helplessness and sometimes you just need to sit with those emotions, put a soundtrack to your feelings, and let time do its thing.

We have extremely varied tastes and right now it’s everything from pop powerhouses like Adele and Ed Sheeran through to Halsey, or BMTH, ADTR and MGK. I personally love me some pop punk/emo so lately I’ve been vibing with Super American. Also, loving the new music our old friends in Stand Atlantic have been releasing – ‘hair out’ is a freakin’ bop.

I enjoy a cheeky beach trip with my girlfriend and our dogs – or anywhere out in nature. I also ride motorbikes and find that a lot of my creative thoughts come when I’m riding.

We just released an album, so we’re going back to what we love most: live shows. We want to share our music with as many people we can this year, and nothing beats the energy from a bunch of like-minded people jamming out together. We’re also starting to bring together some ideas for new songs, so probably a bit of writing too.

Anywhere there’s seafood. I will eat the shit out of a moreton bay bug… oh, and Guzzies – classic.

Favourite place to hang out is at band practice. Couple of beers with some of your best mates talking shit and jamming… nothing better.