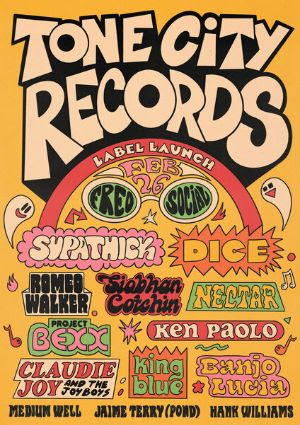 Tone City Recording is one of WA’s premier boutique studios, with Sam Ford at the helm working with some of Australia’s most talented and sonically diverse names. As a new year gets underway, Tone City is ready to take its next steps (read: strides) forward in its evolution.

2022 sees the vision become a reality, with the launch of the official Tone City Records label and the debut of the Tone City Artist Development Program. While the recording studios themselves undergo expansion, with an additional recording space currently under construction in WA’s South West, Tone City are concentrating their efforts on their wildly talented roster and growing their presence not just at home, but beyond.

Tone City Records is home to a roster of artists who are currently making their impact and presence felt nationally (SUPATHICK, DICE, Romeo Walker), as well as those who represent the fresh new wave of WA-bred music leaders (Siobhan Cotchin, Nectar). And as these artists continue to flourish in 2022, the Tone City Artist Development Program exists to bolster their efforts and elevate their artistry.

“Tone City Records is an independent record label designed to assist and develop emerging Australian artists. The Tone City AD program for 2022 will support in creating industry mentorship through the entirety of the artist’s project; including production, mixing, marketing, release schedule and event management.

TCR is like a family – it is built on the artists and myself having the same vision/ambitions and having a mutual connection both creatively and through personal and working relationships.”
Sam Ford, Tone City Records

The official launch of Tone City Records is set to be marked by a special live music event at the Freo Social on February 26th. Featuring live sets from the Tone City roster, as well as performances by fellow artists including Project Bexx, Ken Paolo, Claudie Joy and The Joyboys, King Blue and Banjo Lucia, the entire community is encouraged to come along and celebrate the opening of WA’s newest creative hub.

“I always love chatting about music with Sam. Everything from making it, to releasing it. He really gets it. Being in the studio with him is a dream too and always fun. Super excited to see where he takes his record label.”
Kevin Parker, Tame Impala

“Sam is one of the few producers I trust when I’m sharing my creative space. That’s exactly what you need when you’re trying to get the best out of your art.”
Ian Kenny, Birds of Tokyo

“Sam Ford is one of Australia’s greatest producers, his taste in music is unparalleled and his unwavering support for artists from all walks of life has consistently elevated the WA music scene. Tone City Records is a vibe and I’m digging it!”
Abbe May

“Sam has been the keystone in giving life to our ideas, allowing us to share them with the world. He has opened doors for us that we could not have on our own and in doing so, given us the optimism and drive to expand our horizons and look at a career in the arts.”
Nectar