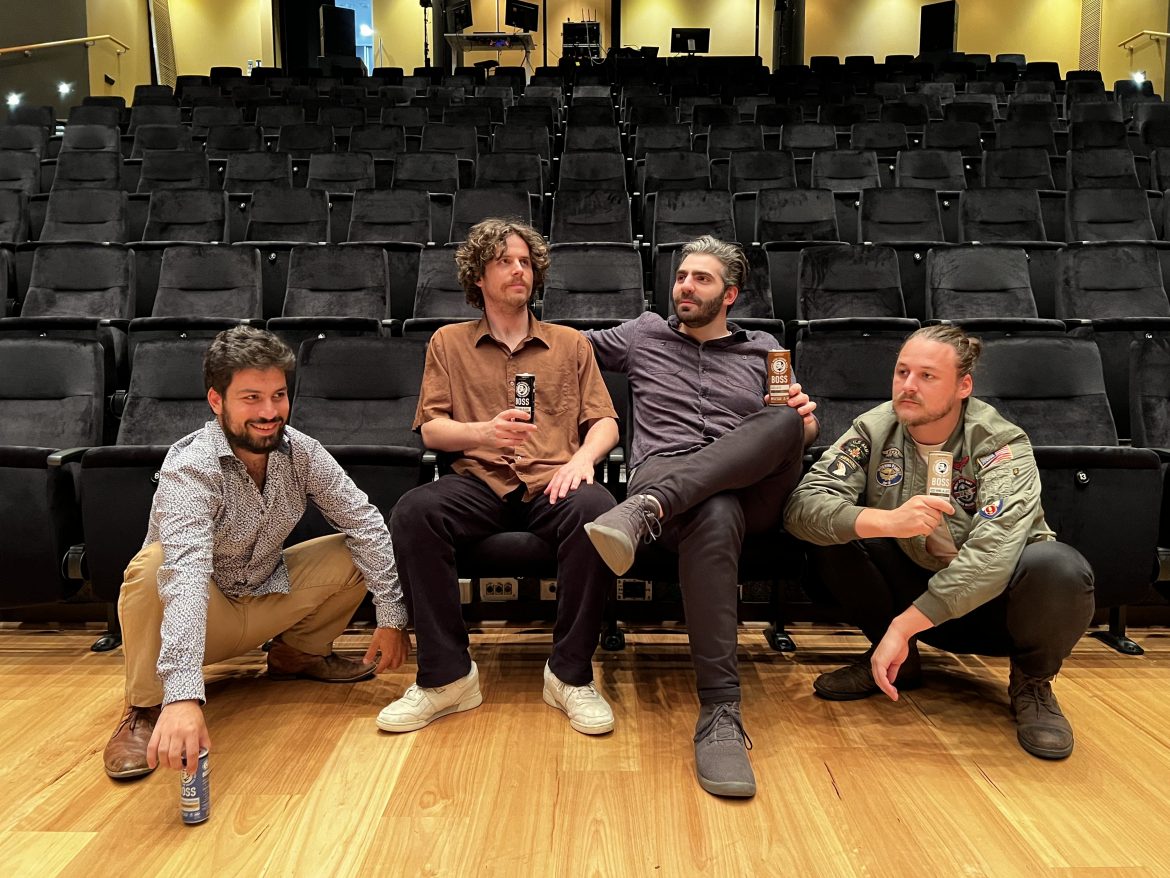 Where are you currently based?
Melbourne! The greatest city I’ve had the pleasure to live in.
How did the band form?
Hamish, Leigh and I have been mates for a dozen years at this point. When it came time to get the band rolling I knew they would be involved. All that was left was to find a keys player and fortunately I had Jason as a contact from my time studying music at Monash Uni. I had a bunch of material written and everyone was happy to jump on board and sink their teeth into it.
What’s been happening recently?
We’ve been gigging around Melbourne a lot! We sold out our first headline show and subsequently played with a variety of local and interstate acts. We’ve been enjoying making funny content for our instagram during rehearsal breaks. Learning the business side of things has been really engaging too. Making merch with Foxtrot Prints has been fun and the reception to the merch was overwhelming to say the least.
Your latest single ‘In Sheep’s Clothing’ is out on the 29th of July, what influenced the sound and songwriting?

Nine Inch Nails was a massive influence for this track. Heavy pounding synth bass defines the track at its core, but Radiohead, Mars Volta, Aphex Twin and many others are also huge influences on us.

How did you go about writing In Sheep’s Clothing?

I wrote the original riff whilst brainstorming ideas for another band in my own time. But I decided it was too good to share and I was holding on to that one for man vs synth! Sometimes a song can take months or a year to write but In Sheep’s Clothing came together relatively quickly. All the parts seemed to fall into place one after the other.

I wrote, performed, recorded, produced, and mixed everything (except the drums were performed by Hamish). Beau McKee mastered the track for me and he performed some dark magic to make it sound as good as it does – believe me. The recordings happened all over Melbourne. From studios I was running to my bedroom to theatre spaces we hired to record the drums this production was very much all over the place.

What does this track mean to you?

This track is about realising you’re not always the good guy in someone’s story. The things about yourself that you hide from others can make you feel like you’re a wolf in sheep’s clothing at times. This song is part of the narrative structure of the album I’m writing which talks about the different hellish places people enter in their everyday lives.

You’re playing the Tote on the 29th to launch In Sheep’s Clothing, what do you have in store for this show?

We’ve got a bunch of new, unheard tracks that we’re premiering for the first time at The Tote which we can’t wait for everyone to hear! We might have a surprise cover nested within one of our tracks too. Be there to check it out!

Who are you listening to at the moment?
I’ve been listening to a lot of Middle Eastern music. From Lina Deeb, to Elias Rahbani and everything in between. On the western side of things Flying Lotus, Tame Impala, Aphex Twin, Justin Timberlake and so many more have racked up a lot of plays on my spotify.
What’s planned for the remainder of 2022 going into 2023?
We’re keen to get a few more singles out by the end of the year and then release the whole album by late this year or early next year. We’d love to tour the east coast!
Favourite food and place to hangout?
Shish Tawouk at A1 Bakery. All day, everyday.
Instagram: @manvssynth
Twitter: @manvssynth
Spotify: manvssynth
Apple Music: manvssynth
Facebook: facebook.com/manvssynth
Website: www.manvssynth.com
Youtube: www.youtube.com/channel/UCZdDDzUl0D13RwqyAUpYDAA
Bandcamp: https://manvssynth.bandcamp.com/
0 comment 0 FacebookTwitterPinterestEmail