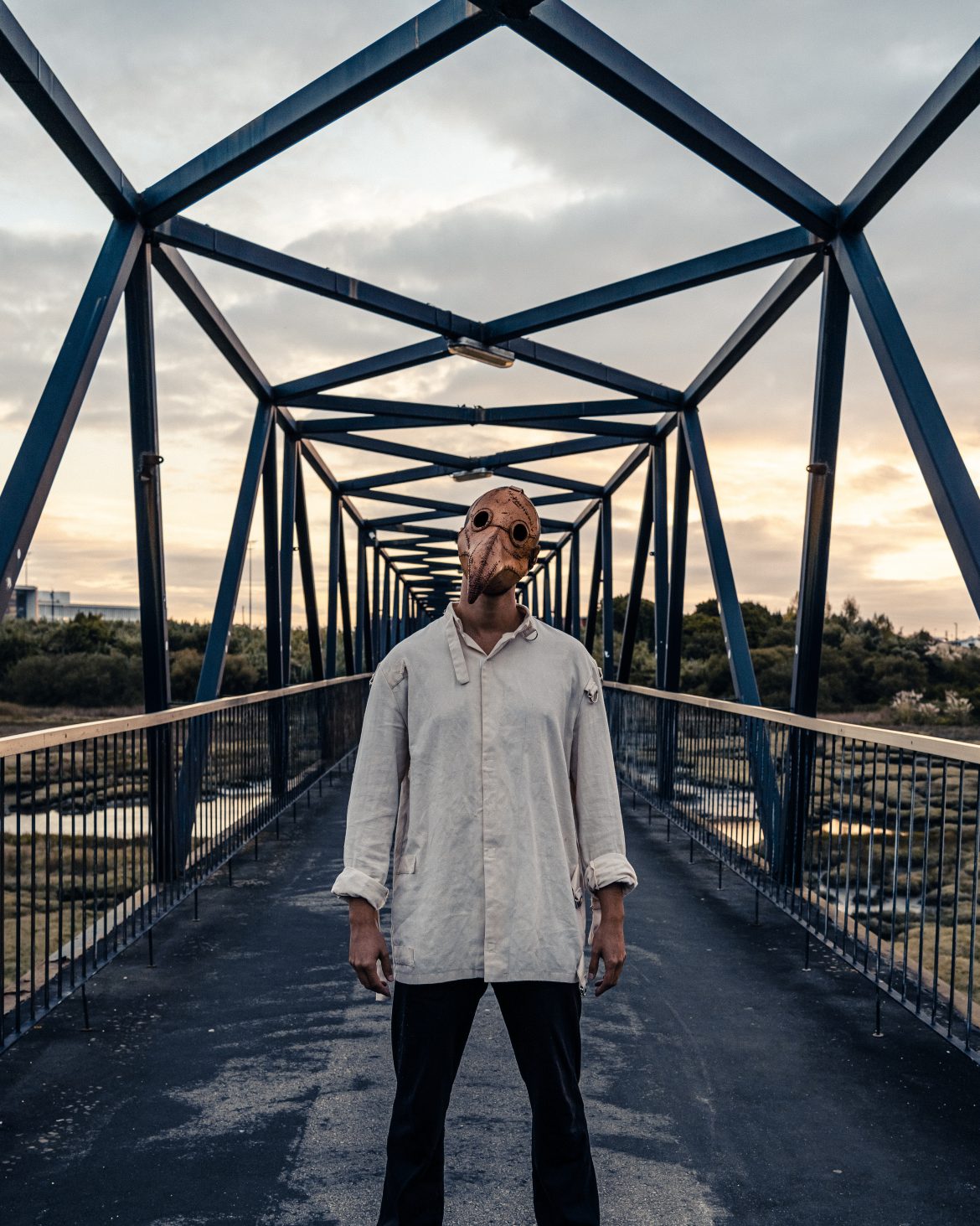 I started my journey as a producer. Back in 2012, a friend of mine presented me a music production program, something I’d never heard of. So, I started experimenting and taking the first steps in FL Studio, which is the DAW I still use these days. I started producing hip hop beats, then I went to drum and bass and I ended up in minimal techno. Then in 2015 I created Hozho. Over time, I improved my own music style, in order to create something unique. Starting to perform as a DJ was a consequence of music production.

Recently I’ve been focusing on the release strategy for my upcoming EP together with my team. Also, I’m going to start a world tour soon and I’ve been getting ready for that. In the midst of it all, I try to find some time to produce songs for my next album.

What or who influenced your latest single ‘Troubles in Paradise’?

Studio but I never finished. One day I was listening to the unfinished projects I had and this one stood out from the others, it had a bassline that I loved. At the time, the name of the project was Troubles In Paradise so I decided to keep that track ID and create a story around that name.

How did this single come about?

Well, one would think that now that I have gigs all over the world, tracks with millions of views and streams on digital platforms, that everything is fine and that I live a good life. But it’s not always like that. We all have everyday problems. This particular track focuses on the problems of a romantic relationship and that’s the main message of the track.

After the release of my single Honey Trap in February 2022 I started working on Troubles In Paradise. I think by the end of March I already had the track done because I played it for the first time in Bangkok on April 9th. The track was produced in my home studio and was mastered by Pobla Studio with whom I have been working for a few years now.

How did you approach the production process?

It’s like writing a book: you’re not gonna start putting random words on a paper and hoping they make sense. I had a clear idea in my mind about the story I wanted to tell and the emotions I wanted to transmit in Troubles In Paradise, related to breakup, that even when everything seems to be going well, problems end up happening. The challenge was to try to reproduce this message in an electronic music track, with just a few vocal lines, using the power of basslines, melodies, pads, groove, etc. The instruments, the samples, the VST’s… all of that is secondary. What matters is that at the end of the day, the music manages to awaken the emotion I was looking for. Because for me music is not just music, it’s a story. In the same way that the Mona Lisa is not just a woman smiling. There is something else.

Please tell us about your love for the Breaking Bad series:

What can I say… for me it’s the best TV series ever because it has a message that I identify with. Aside from the drugs and all that, the series focuses on a man who knows he’s going to die because he has cancer (spoiler alert). It’s interesting how we start to live our lives when we’re given an “expiration date”. We start doing today what, in a normal situation, we would only do tomorrow (or never). What Breaking Bad tells me is that we should start living the life we deserve, stepping out of our comfort zone, doing things we’ve never done before, to truly enjoy life and live it in accordance with our own terms, before it’s too late.

You’ve risen fast as an emerging act in the melodic techno/house scene, what do you attribute to this fast success?

As Charles Bukowski said: wherever the crowd goes, run in the other direction. I truly believe that the music I produce is different, unique and I think a lot of people can relate to it. When your music is good and you work with a professional team that supports you, that helps you promote your work and gets you the best shows, your name and your music starts to be recognized worldwide.

How do you feel now as a prominent emerging artist?

Please tell us about your self-styled genre ‘Melodark’ and what it means to you:

For me Melodark goes beyond being just a music genre. Since its inception, it has become an artistic movement with an emotional, motivational and overcoming message. For me it’s a lifestyle and a philosophy. Musically speaking, Melodark is characterized by the symbiotic contrast between the beautiful melodies (melo) and the darkness surrounding the synths and basslines (dark), mostly based on a minimal techno beat.

I like to read, watch TV series and movies, play tennis, travel and be in contact with nature.

Where and when are you playing next?

At the end of August I will start my tour in the United States and Latin America.

In 2022, I plan to release my second solo album – Psychological Issues – and recorded my fourth DJ Mix. A collaboration with my friend and artist Droplex will also be released, a single track called Sitting In This Cage. Apart from the releases, I expect a big tour until the end of the year, with nearly 30 shows all over the world.

Place to hangout: Any place nearby the beach.