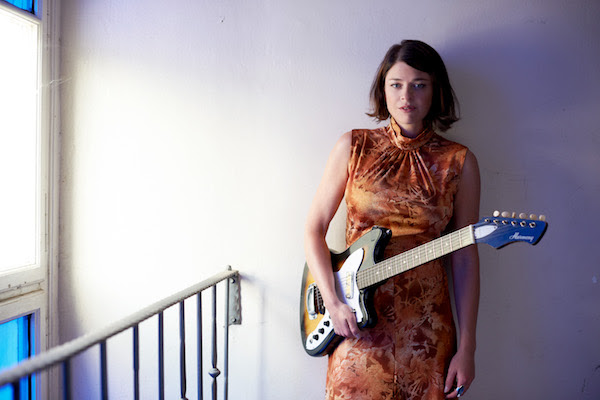 Following the recent announcement of new album ‘Psychogeology’ for release on February 15th 2019 via Bronzerat, Essex-raised, Berlin-based Gemma Ray has shared new tour dates, including a UK run in March.

While others have, in recent years, helped popularise the term ‘psychogeography’ – the urge to explore the urban environment and its impact, consciously and subconsciously – Ray is drawn to the time-defying, time-defining outcrops that exist beyond our cities, and the manner in which this natural architecture underlines “how small we are, how trivial the most unsurmountable of our personal problems”.

The first glimpse at this self-produced new album is the reverb-drenched, 70s pop swagger of “Blossom Crawls”, scattered with echoes of Fleetwood Mac, which tackles a specific incident – a panic attack in the back of a taxi – her overwrought sensation that “Blossom crawls back into its buds” transformed into an affirmative resolution to “put a stop to its cruel tricks/ Gonna get there first to soften the hit”.

The word ‘rock’ has many connotations, but for Gemma Ray, the most important is probably not the one you’d expect most musicians to nurse. The Essex-raised, Berlin-based singer and songwriter clings to its most fundamental definition, insisting that, when she takes to the road – as she did almost unremittingly in the year following the release of her last album, 2016’s acclaimed ‘The Exodus Suite’ – she find the time to explore the landscape that touring can reveal. In Ray‘s world, the word conjures up images of the grand, twisted formations she’s seen while travelling the world, whether in the immense deserts of the US or among the carved mountains of New Zealand.

It’s the development of Ray’s emotional connection to such spectacular scenes that lies deep at the heart of‘Psychogeology’, which, in keeping with its subject matter, represents Ray’s most ambitious release to date, its intricate arrangements and textures – including choral and string arrangements – the result of almost a year’s labour determinedly hewn from rare periods of time available between tours. The album, she says, is “an ode to the majesty of landscape, the enormity of nature and time, and the inevitability of every human life eventually forming a minuscule part of further landscapes.”

Ray has worked alongside, among others, Sparks (who in fact produced Ray covering their own songs), Suicide’sAlan Vega (their collaboration turned out to be one of his final recordings), Howe Gelb (Giant Sand), Thomas Wydler (The Bad Seeds) and arranger Fiona Brice. She was also invited to perform with Potsdam, Germany’s legendary Filmorchester Babelsberg, and this December she’ll join them again, this time with Peaches, Einstürzende Neubauten’s Jochen Arbeit and other special guests as part of The Can Projekt, a celebration of ground-breaking ‘krautrock ‘pioneers Can taking place at Berlin’s famed Volksbühne Theatre.

‘Psychogeology’, however, documents Ray’s troubles, yet simultaneously expresses with zeal the ways in which she’s surmounted them to find her place in the world. On the timeless ‘Psychogeology’ – a journey that celebrates triumphs over tribulations – Gemma Ray offers rock for all ages.