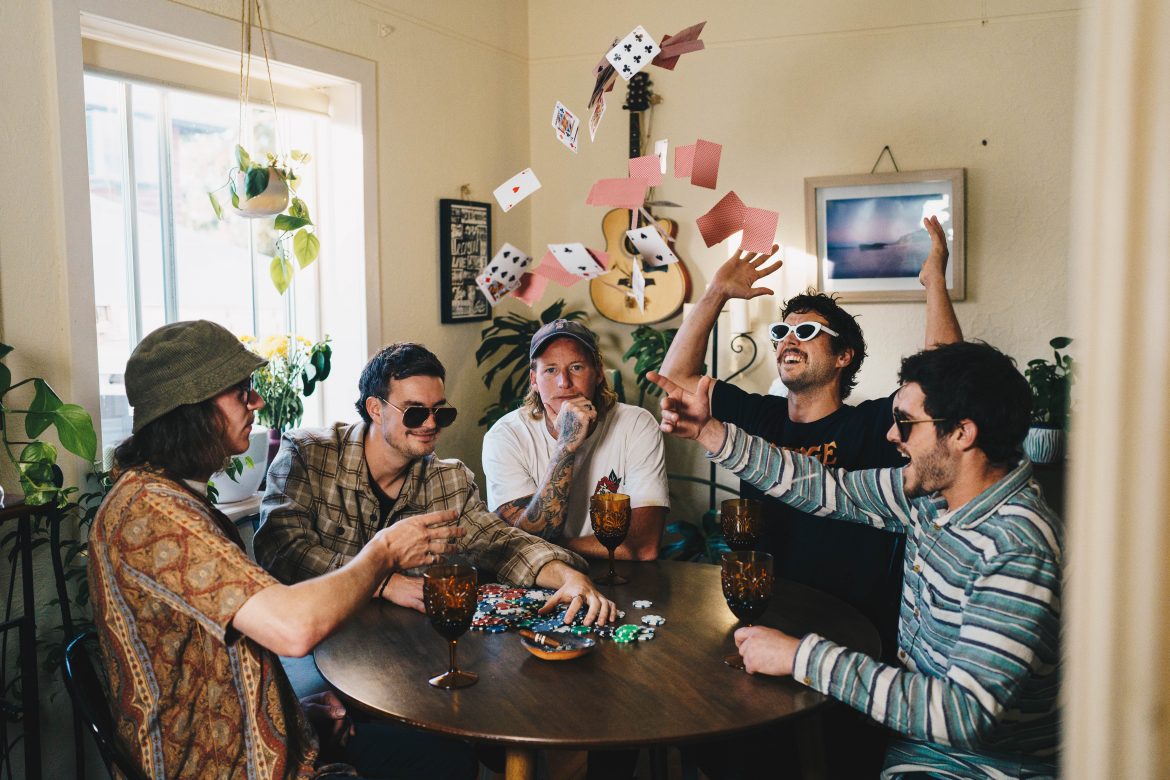 Tied Down is currently based in Perth WA

We had a pretty funny startup: Deano (drums) & Kado (rhythm guitar) have been mates since they were about 4 years old and always jammed together. I (CJ – vocals) played footy with Kado and decided to head around to jam with the both of them and covered The Comedown by Ocean Alley. As soon as we finished the song we kind of looked at each other like, “ahh that was actually pretty good” haha. Steve (lead guitar) was the wild chance meeting as the boys met him on the roof of a hostel in Tokyo while over there for Fuji Rock Festival which still is pretty unbelievable how that panned out. Papa D (Dolsy – bass) was the last pickup as he went to school with Kado. They hadn’t seen each other for a while then saw each other at a local hardware store and Kado gave the invite to come have a splash with us!

Gigs, gigs, gigs. We’ve been on a massive run of shows in the last couple of months playing our Undefeated single launch, two gigs alongside Gyroscope and sold out shows with South Summit & Saviour! It’s been an unreal run of gigs and we’re thankful for the opportunities!

Your latest single ‘Undefeated’ will be out now, what influenced the sound and songwriting?

Undefeated as a whole to me is a powerful anti-suicide note. We wanted to make an up-tempo, uplifting track about pushing through all the shit you have to go through in everyday life and not giving up no matter what. This track pulled a lot from our heavier influences like Title Fight, Trophy Eyes and Basement while keeping our trademark punk rock sound. We couldn’t be happier with the way it turned out!

We rolled this one through our mate Matt Templeman again as we did for our last single Slow.
Temps is great to work with and provided a lot of the drive for the track. We also had drum tech extraordinaire Fraser Cringle and riff king Scott Kay work with us then had it produced by Simon Struthers. Such a great time working with all of them and they really helped us get the most out of the track.

Please tell us about how important it is to you to touch on deeper topics through your lyrics:

Great question. For me, I determine what I want to touch on once I’ve completely immersed myself into the roots of the song musically. I heard the shell of Undefeated and knew instantly what I wanted it to delve into. Like I said, this song is a fuck you to suicide and all the mental breakdowns that can try and push you towards breaking point and being able to have the resilience to say, nah not today. As a collective, I think all of us at TD believe in writing meaningful music and really don’t want to be putting out standard tracks talking about the same old shit.

Please tell us about your process of lyric writing:

Haha, lyrics are a funny one for me.
I listen to the shell of our music at its birth then I generally take it home with me on earphones and start listening on repeat. I’ve always had a knack for writing hooks and melodies really easily so I’ll normally start singing made up words in the order I want them to go. At any given time I probably have 5 different topics with some choruses ready to go so I’ll place the one in there that fits the music the best and then send it to the boys, get some feedback and work on it from there. I won’t stop until I know I have the right combination of words and that I’ve packed as much meaning and punch that I possibly can. Apart from all that, the most important part of the lyrics writing process is probably coffee haha.

We’ve got a big mixture going on at the moment. The Tied Down playlist is a mixed bag of artists and genres but I’ll namedrop a few that we’re on at the moment: South Summit, Posseshot, Angie Colman, Speed, Lilos, Joan & The Giants & Ratsalad to name a few!

The place to be baby! Sick shows every week, new singles every week, loads of radio play, bands heading over east. It’s literally all happening and it feels like it’s long overdue!

We’re knocking up a solid end of year run including another show or two with South Summit in September, heading up to Geraldton with Ratsald in October and then hitting Sydney for a couple shows in November as our first trip to the East Coast! We’ve set some time aside for writing and recording so we can hopefully spoil everyone with some new bangers shortly!

At the moment I can’t stop smashing the pizza. Should probably have shares in my local pizzeria the way I’m flying through it aha. I love hanging out in any creative space – jam rooms, small time acoustic gigs or literally just an air BNB with a good crew and a couple instruments. Creativity breeds creativity yo!