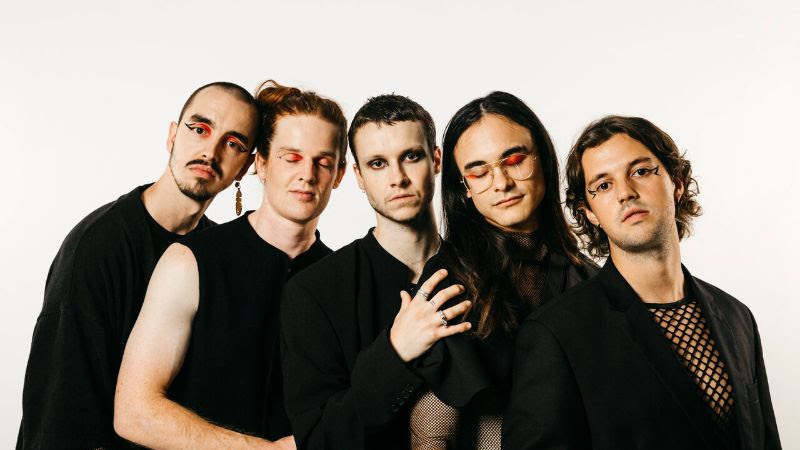 Having spent the first half of the year revelling in their return to live touring, Sydney’s Thunder Fox have kept the same energy they’ve brought to stages along the East Coast into new music.

The five-piece’s new single – ‘Hard Times’ – is a reflection of how much the Thunder Fox dynamic has bolstered since the release of their sophomore album Sanctuary in 2021. The group’s music, drenched in groove and funk, is elevated and as they continue to explore new influences and creative pathways, Thunder Fox enter a new era.

Like Sanctuary before it, ‘Hard Times’ is a great example of how Thunder Fox thrive when in a realm of R&B, funk and pop sonics, adding their own charm to some punchy and hedonistic arrangements.

“‘Hard Times’ is a song of catharsis. I was feeling pretty down and out at the time, growing tired of the bad news, bad people and bad jobs sucking all the joy from our lives. The song tells the story of two people who are struggling with 21st century issues like the effects our media has on body image, the fear women can feel for their safety when walking home at night or working a shitty job and still not being able to pay for rent.

All of these issues I’ve experienced or know someone who has so they’re close to home but, there’s a twist. I wasn’t feeling the idea of writing a depressing track so I had to find a silver lining.

When I really thought about it, almost everyone has experienced one or more of these problems; I’m really just singing about average people like myself or my friends. The idea that we’re not alone in this was the inspiration that tied the track together and where I found the hook. There’s a pumping beat to boot so we’re all gonna listen to this track and get down to it thinking, “Oh well, I guess we’re just living through hard times”. (but also let’s take action on these issues after we dance away our frustration).”
THUNDER FOX

The music video for ‘Hard Times’ was conceptualised by Jesse Tachibana and executed by director Nick Allen. Working with choreographer Jess Ines, the clip matches the vibe of the song and engages in the fun side of Thunder Fox to great results.

“For the ‘Hard Times’ video I really wanted to lean into the synth driven, high energy vibe of the song by showcasing some incredible dancers in a neon lit studio. A lot of our previous videos have had a large focus on narrative and I thought it would be fun to depart from this approach a little and really focus on aesthetic, by carefully curating lighting scenes, costumes and movement. Huge shoutout to the incredible team that made it all happen, with special props to Nick Allen our Director and Jess Ines who came up with the choreography.”
JESSE TACHIBANA, THUNDER FOX

Thunder Fox have become one of Sydney’s favourite groups in recent years and as a live unit, the band has had their evolution play out gloriously on stages as varied as Caloundra Music Festival, Lost Paradise, Subsonic Music Festival and more.

Having supported the likes of Ocean Alley and Winston Surfshirt, as well as completing their own successful run of headline shows to a growing number of fierce fans, Thunder Fox are proving their staying power with each release.

“It’s a kaleidoscopic, exhilarating piece of funky R&B-infused pop, and almost defies belief at how something so majestic can arrive when the world feels so dismal.”
Rolling Stone Australia (‘Head In The Clouds’, 2021)

“When you’ve got that bass, horns and the type of swagger only really reserved for those who can walk the walk as well as they can talk the talk, you’ve got a formula that can’t fail”
The AU Review

“The funky saucepan has boiled over with Thunder Fox’s horned up mixture going everywhere. It sounds like way more fun that that though.”
Triple J Unearthed, Dave Ruby Howe (‘Not For Sale’, 2021)

“…sultry sax-iness and funk-drenched…a groove-laden number that is set to get feet churning and hips swaying.”
Scenestr (‘Been Busy’, 2019)

“Their music is fun and bawdy, yet with a sexy sophistication that makes it incredibly appealing.”
Eclectic Music Lover