I’m based in the little seaside town of Penguin on the NW Coast of Tasmania. It’s an amazing place with a creative community, a heap of cafes, and a couple of pubs on the main street. Oh, and we have a giant 3 metre tall Penguin, can’t forget that.

It’s something I’ve always done. I started playing guitar when I was 7 on an old acoustic that was pretty much attached to me. I started writing songs and playing in pubs and bars in my early teens and have just kept doing it since.

I’ve been working on a few new song ideas and preparing for a couple of shows. I’ve been blown away by the response I’ve received from my last couple of singles “Something In My Eye” and now “Little Space”. I’m lucky to be able to do what I love: make music, and it’s even better when people like it. So, recently, I’ve been working on more songs.

Your latest single ‘Little Space’ is out now, what influenced the sound and songwriting?

A whole bunch of things. When I’m writing a song, there is a thousand different perspectives going around my head. How does the music build, does the song structure take you somewhere, do the lyrics make sense, do they mean something, does it draw you in. Other times when I’m writing a song, my head is completely empty, and it just happens. “Little Space” is a bit of a different direction for me, but it feels good to be writing in this style. It’s also a different because it’s a song with no chorus – but I still wanted to draw the listener in. I wanted the listener to be surrounded by sound, like they are inside something. There are around 6 guitar parts in there, along with bass, drums, and a heap of backing vocals. You can even hear my daughters singing the “and I will always love you” parts. I like creating simple songs, but I also enjoy layering them up – not to add complexity, but to add depth. Jon Grace did an amazing job with mixing the vocals, which I think helps the listener sink into the track. To me, there are aspects of Radiohead, Billie Eilish, Talking Heads and maybe even The Cure in there, but chuck some headphones on and see what you think. Sink into it.

How did Little Space come about?

This song started out as a little two chord guitar riff and just grew from there. I often start with a rhythm and maybe one simple lyrical idea. I like the way the words “there’s a little space” roll off the tongue, and how it represents a place of safety that hopefully we all can find. Some people are doing it tough, but it’s a nice thought to know that there is a little space somewhere in this crazy world where you belong.

I have a humble little home studio where I spend a lot of time writing, producing, and recording my music. Everything for “Little Space” was performed and recorded by me in my little studio, and then I sent it to Jon Grace to mix. I’ve worked with Jon on other projects in the past, and he is one of the nicest guys you’ll meet in the industry. Jon has worked with bands like Bakers Eddy, Dear Seattle, Dune Rats and Kingswood, and I really like his creative approach to making music. The track was mastered by Samuel K Sproull who is an accomplished producer and amazing musician in his own right. I’m lucky to be working with such a cool team.

Is there an EP on the way? If so, please tell us more:

After recently releasing “Something In My Eye” and “Little Space”, I’m now taking some time to work on new material – the beginnings of an EP. I guess we’ll see where it takes me.

Will you be touring anytime soon?  If so, where and when?

I have a couple shows coming up around Tasmania. I’m playing in Devonport on the 21st of May alongside Without Fail, Adapt, and The True Champions of Breakfast. Then in Launceston on the 9th of July with Slow Down Sonic. I’d love to jump on a plane and tour again (Melbourne, Adelaide, Sydney, Brisbane, everywhere!), maybe when the EP is done?

I’ve been listening to a lot of Tassie music lately, bands like Spkezy, Adapt, Broxton and Verticoli have all got some great music out at the moment. Other Aussie acts I’m enjoying are Sly Withers, Alice Skye, Week Neez, and Totally Unicorn.

Hanging out with my family and friends, going to see live music, or just zoning out and playing some old-school SNES. A bit of NBA Jam, Street Fighter, or Mario Kart – that’s always a good time.

I’m hoping to spend some time writing and recording, with a few shows thrown in for good measure!

There is a place called “Wok and Roll” that do great sushi, but my favourite place at the moment is the “Penguin Beer Co”.  They do live music, epic burgers, and a range of locally brewed beers. You should try the “Emperor Penguin” IPA, it’s fantastic. 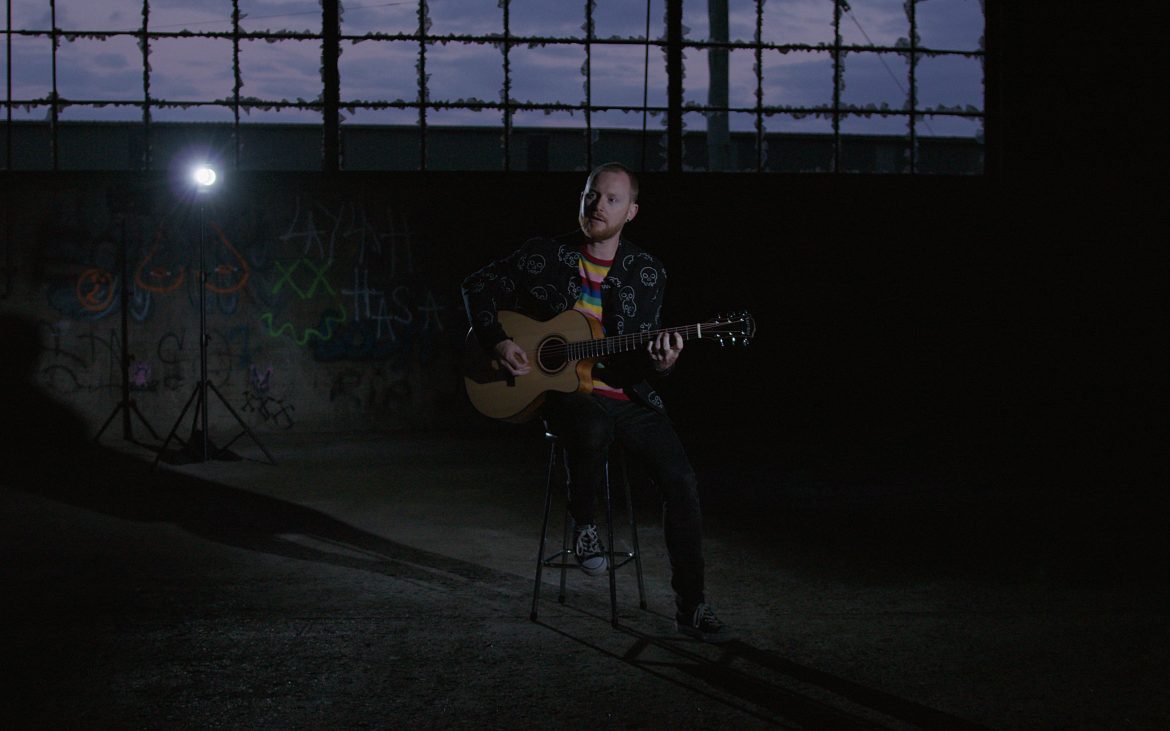 Marcus Wynwood’s resume is as extensive as it is impressive. Not only a founding member of punk-rock band Captives, but he’s also riffed to crowds from the Falls Festival main stage, Envol et Macadam Festival (Quebec), Festivals at the Espy as well as support slots for COG, Shihad, Tumbleweed, The Damned and Gay Paris to name a few.

The ARIA Performing Artist and D’Addario Endorsed artist focused his attention in late 2020 on his solo work. Featured in Australian Guitar Magazine as a “Guitarist to Watch”, Marcus has well and truly earned the title with latest single ‘Little Space’

Featuring poignant and reflective lyrics, distorted and expertly layered vocals with unforgettable and hard-hitting guitar riffs, ‘Little Space’ proves Marcus’ talent. Sonically Marcus has crafted the sound to surround the listener – adding to the comforting message behind the song.

Speaking of the tender meaning behind the tune, he says “The message I wanted to get across with this song is that no matter what’s going on in your life or how dark it gets, there is always a place for you. There’s a little space where you belong.” Marcus Wynwood

After an extensive career including touring both domestically and internationally, Marcus Wynwood well and truly understands the artistry in crafting a song. Undulating between tender and passionate, ‘Little Space’ is a song that feels simultaneously both energising and comforting, not an easy feat to achieve.

This new single was written, performed, and recorded by Marcus Wynwood in Penguin, lutruwita (Tasmania). It was mixed by Jon Grace (Bakers Eddy, Dear Seattle) and mastered by Samuel K Sproull (The Getaway Plan, Bodyjar). These creative influences have come together in a sonic union of talent, combining the masterful touch of three different musicians.

The accompanying music video, created by Moon Cheese Studio in Devonport, lutruwita (Tasmania),  follows the journey of mini-Marcus as he battles with the trials and tribulations of everyday life within the confines of his own head. “I’ve always wanted to have an animated clip, and the message of belonging in this song suited it perfectly. The viewer goes inside my head and sees what’s happening in my mind.” Marcus Wynwood

“The songwriting is just so good, he’s turning into quite the songwriter.”

LITTLE SPACE is out now