SPRING LOADED TO KICK OFF IN MELB NEXT SAT! “THIS IS A GOOD NEWS STORY ABOUT HOW THERE’S ACTUALLY A FESTIVAL GOING AHEAD” PHIL JAMIESON 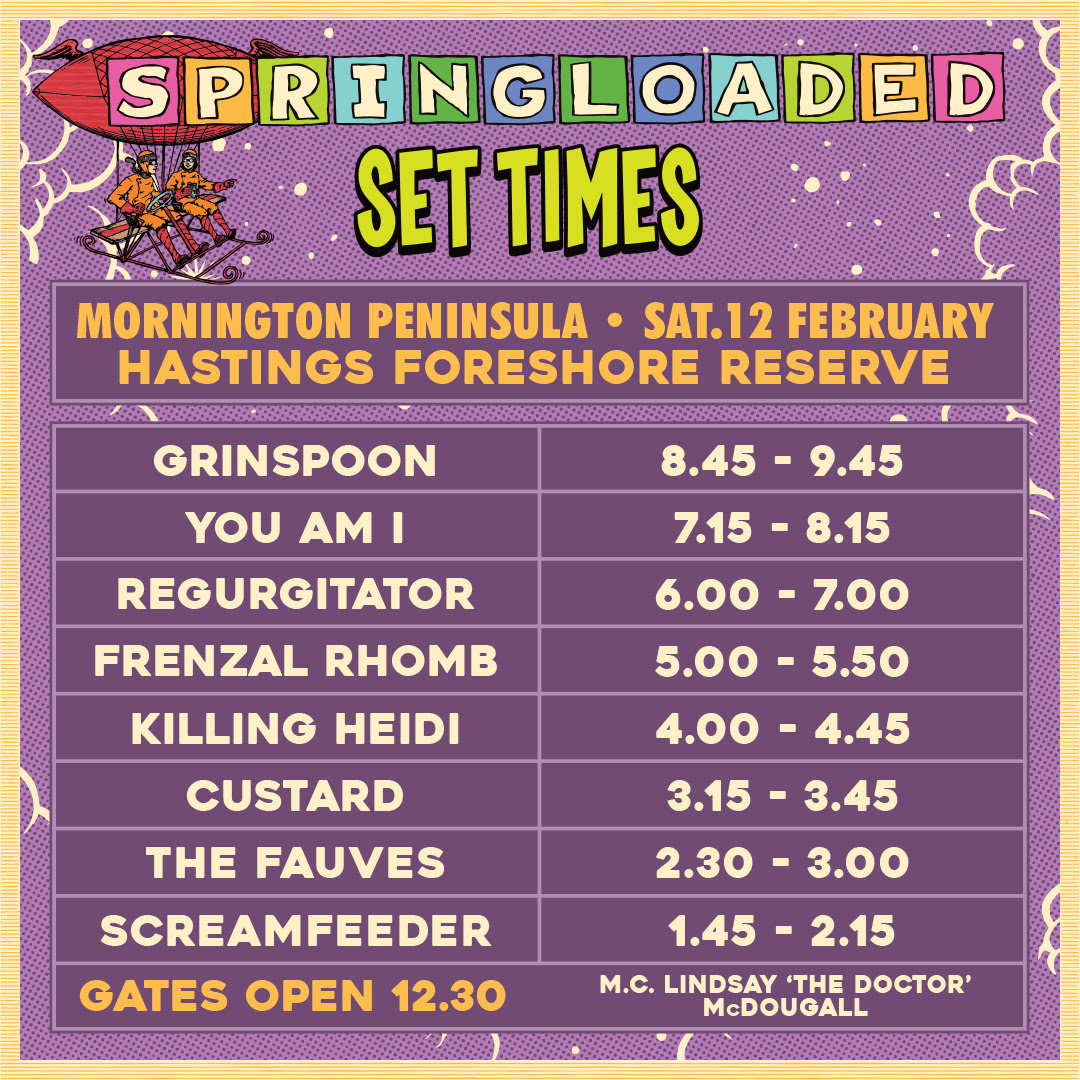 Spring Loaded has well and truly declared a triumphant return to live music, with the iconic Aussie festival set to storm Hastings Foreshore Reserve on the Mornington Peninsula next Saturday February 12, and there are tickets still available. The colossal lineup is dripping in 90s Aussie alt rock nostalgia and boasts a haul of the decade’s most celebrated acts.

Sharing the event program today, gates will open at 12.30pm and Screamfeeder will kick things off at 1.45pm, before The Fauves jump on at 2.30pm, Custard at 3.15pm, Killing Heidi at 4pm, Frenzal Rhomb at 5pm, Regurgitator at 6pm, You Am I at 7.15pm and Grinspoon at 8.45pm to headline the ultimate day of Aussie rock.

The man who engineered this ripper opportunity for us all to relive our youth and celebrate the return of live music, Empire’s Marc Christowski is thrilled to be getting another Spring Loaded event away, saying, “We are beyond excited to finally be able to stage Spring Loaded on the Mornington Peninsula, it’s going to be a massive explosion of rock after two years of uncertainty. We can’t wait to party like it’s 1996 and bring you the bands you love from the 90s!”

“We only managed two Spring Loaded events last year before everything went crazy,” explains Grinspoon frontman Phil Jamieson. “Both gigs were quite emotional because it had been so long since anyone had seen anyone, especially in the backstage area.  Not just artists and band members, but crew and people we love, so it was a massive reunion backstage. Seeing grey hairs and beards, it’s a long way from Homebake ’98, but the music hasn’t changed.  What was really special about those gigs was the support and comraderie between all the groups and then to see a crowd that was excited to be there as well.”
Pumped to hit the Spring Loaded stage at Hastings Foreshore Reserve, Jamieson says,“I can’t actually believe it’s real.  You Am I, Regurgitator, the best of the best – Frenzal, Killing Heidi, Custard,The Fauves, Screamfeeder… so you know, there’s nothing really bad about it, it’s hard to hate, and then you get me doing silly dancing and clapping, what could possibly go wrong?!  Hope to see you all there, this is a good news story about how there’s actually a festival going ahead!”

Covering all bases, the festival will be bustling with craft beer and an enviable collection of the locale’s cherry-picked food trucks. Spring Loaded is a fully licensed 18+ event, strictly no BYO alcohol.  It is an outdoor event and will go ahead rain, hail or shine.  No tables, tents, sun shelters or umbrellas are permitted, punters are urged to bring ponchos/raincoats and gumboots if rain is forecast.  Picnic rugs and low camp chairs are permitted, as well as snack food in small cooler bags, sealed bottles of water, and there will be water refill stations. And with onsite parking available at the point of entry, there’s no excuse not to come and enjoy a rocking day out on the glorious Mornington Peninsula!

The Spring Loaded festival will be held with a commitment to a COVID Safe environment.  Festival organisers will work closely with and comply with all requirements of the public health authorities in respect of this show.

There are tickets still available from Ticketek and Oztix.

ABOUT TEG LIVE
TEG Live is a dynamic and diverse promoter of live content operating in many genres, including music, sport, family entertainment, esports and exhibitions. TEG Live connects millions of fans every year with unique live experiences and adds value to events with hospitality, partnership and sponsorship services.

ABOUT EMPIRE
Empire Touring is a widely respected entertainment, promotions, marketing and events company. We have been producing live entertainment across Australia since 1982 and will continue to do so because WE LOVE ROCK ’N ROLL.

SPRING LOADED TO KICK OFF IN MELB NEXT SAT! "THIS IS A GOOD NEWS STORY ABOUT HOW THERE'S ACTUALLY A FESTIVAL GOING AHEAD" PHIL JAMIESON
0 comment 0 FacebookTwitterPinterestEmail