SASAMI releases video for ‘Not The Time’ 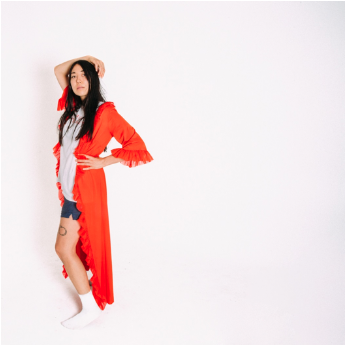 Los Angeles-based artist SASAMI has released a video for ‘Not The Time’.
Gorilla vs Bear premiered the video overnight, calling it a “vibrant and charming video for her sweetly buzzing new single”. Co-directed by Kate Hollowell and Sasami Ashworth, the video features the LA Municipal Dance Squad and The Linda Lindas as SASAMI’s backing band.

Last month, The FADER called ‘Not The Time’ a “fully-formed, heart-striking gem”, hailing SASAMI as “rock’s next big thing”.

‘Not The Time’ and SASAMI’s previous single ‘Callous’, which Pitchfork named Best New Track earlier this year, are available digitally everywhere and a limited physical version on 7″ vinyl is available via Domino. 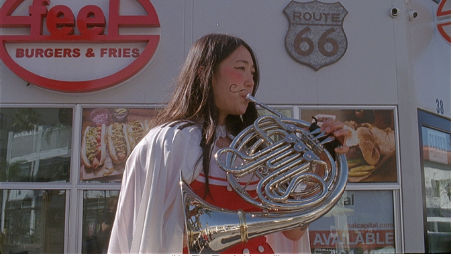 ‘Not The Time’ video still

SASAMI (Sasami Ashworth) has been making music in the Los Angeles area, in almost every way you can, for the last decade. From playing French horn in orchestras and studios and playing keys, bass, and guitar in local rock bands (Cherry Glazerr, Dirt Dress), to contributing vocals/string/horn arrangements to studio albums (Curtis Harding, Wild Nothing, Hand Habits) and producing on tracks for other respected artists (Soko), she has gained a reputation as an all-around musical badass.

After graduating from the Eastman School of Music in 2012, SASAMI spent her time scoring and making orchestral arrangements for films, commercials and studio albums, as well as being a deeply committed music teacher in Los Angeles. She spent the previous two and a half years touring the world non-stop playing synths in the band Cherry Glazerr and is now taking a turn to focus on her own music. SASAMI has already shared bills with the likes of Mitski, Japanese Breakfast, Liz Phair, The Breeders and Blondie.

Praise for SASAMI:
“SASAMI is rock’s next big thing.” The FADER
“Ashworth’s chronicle of self-sacrifice for an undeserving lover is heartbreaking, but its her refined and exuberant sound that makes ‘Callous’ thrilling and personal.” Pitchfork, Best New Track
“With a sound that mixes ’90s distorted jangle-rock and guitar pop as practiced by My Bloody Valentine, the Breeders and Teenage Fanclub, the L.A.-based singer and songwriter Sasami Ashworth’s initial songs possess an enviable effortlessness, as though her muse has its own lane on the aesthetic superhighway.” LA Times
“Ashworth demonstrates her chops as a composer and musician… Has the polish and assuredness of someone that’s been honing their craft for a long while now.” Stereogum
“Has both an airy dream pop side and a heavier grungy side, and Sasami blends those sounds with expertise. It’s really good, effortlessly enjoyable stuff.” Brooklyn Vegan
“Searing solos” The Observer
“The Los Angeles artist melds raw emotion and blurry guitar chords” Music Week