Near the tail end of 2018, Panda Bear a.k.a. Noah Lennox, founding member of Animal Collective, announced Buoys – a full-length follow up to 2015’s kaleidoscopic album Panda Bear Meets The Grim Reaper and the vinyl-only EP A Day With The Homies (2018). Buoys will be released February 8th 2019.

Here’s what happens when you ask Dean to direct a music video:

In tandem with the start of the New Year comes the arrival of the Most Anticipated Albums of 2019 lists, many of which feature Buoys. Check out lists from Vulture, SPIN, Pitchfork, Stereogum and Consequence of Sound, all of which include mention of the forthcoming album.

Buoys was co-produced and co-mixed by collaborator Rusty Santos in Lennox’s adopted home of Lisbon, Portugal. Lennox and Santos last collaborated on the landmark Panda Bear album Person Pitch, which had its 10-year anniversary last year.

Alongside Santos, Buoys also features collaborators in Chilean DJ/vocalist Lizz and Portuguese musician Dino D’Santiago, both artists who came to Lennox via Santos’ recent trap and reggaeton production work; the former contributes arrangements throughout the album including ‘Dolphin’, and both lend their vocals to ‘Inner Monologue’.

Buoys will be available on CD, LP, and Limited Edition LP, and digitally on February 8, 2019. Buoys artwork was created by Danny Perez, with photography by Fernanda Pereira, and with additional design by Rob Carmichael, SEEN. 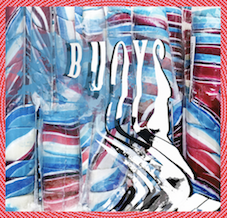