ORCHARDS Reveal ‘Age of You’ Video

– Tickets on sale at 10am Friday 30th November

Rounding off a very successful year that’s seen them rapidly gaining ground on all fronts, Brighton alt-pop quartet ORCHARDS are pleased to announce their first ever UK headline tour for March/April 2019. Tickets go on sale at 10am Friday 30th November.

The band have also revealed a brand new video for their latest single ‘Age of You’, the last to be taken from their 2018 breakout EP Losers/Lovers, which is out now on Big Scary Monsters Records.

“This track is about making promises but feeling as though you didn’t fulfil them,” explains vocalist Lucy Evers, “Knowing that you have every opportunity to become the best you possible, but just feeling like something/someone is missing. Out of all the tracks on the EP this was the hardest, emotionally, to write, but is now my favourite song. It’s like a little dose of therapy every time we perform it.”

Directed by Stewart Gardiner (AKA Highforneon), simplicity was key for the band when it came to the video for the song, which incorporates ideas from fans, as they elaborate: “We wanted it to be super simple—clean lines, bright colours—but we wanted it to feel comfortable. We ran with the opening line of the song “How do I say you look happy?” and decided to show some of the things that our Instagram followers told us made them happy: family, food, music, coffee (mainly because this band runs on coffee).”

2018 was a stellar year for the band, which saw the Orchards live show go from strength to strength on tour dates alongside Tiny Moving Parts; the band selling out their own debut headline London show; support slots with Hippo Campus, Fatherson and more; a string of packed festival appearances at ArcTanGent, TRUCK, The Great Escape, and Hit The North among many others.

Praise for the band’s latest material flooded in from BBC 6Music, Noisey, The Line of Best Fit, DIY, Alternative Press, Pop Matters, DORK, UPSET and a host of blogs and zines. 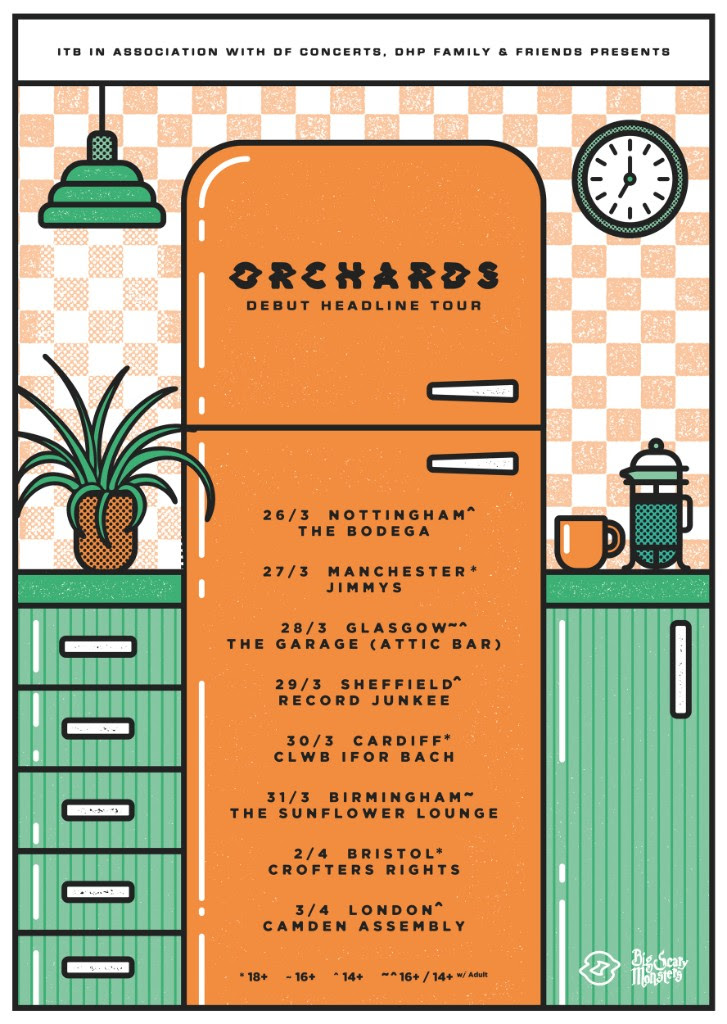