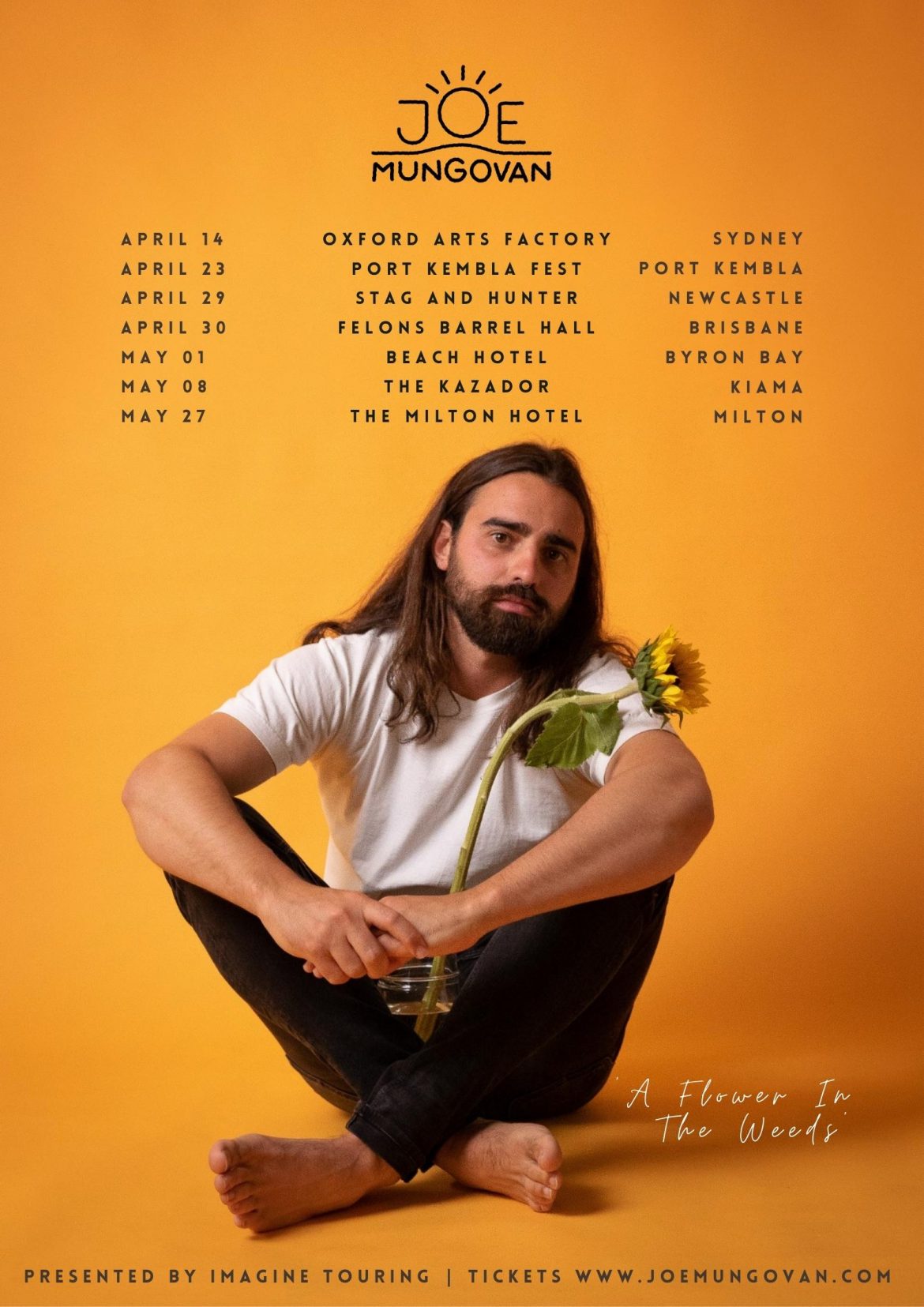 DEBUT ALBUM ‘A FLOWER IN THE WEEDS’ OUT NOW

NSW South Coast multi-instrumentalist, singer/songwriter, producer and APRA award nominee Joe Mungovan is thrilled to announce his rescheduled tour dates across the East Coast of Australia in April and May.

Joe will be performing songs from his debut album ‘A Flower In The Weeds’ with his full band.

“Well, we could never have imagined the postponements would keep coming… but nothing will stop us trying to get to you and play these shows. We’ve rescheduled the Brisbane, Byron and Milton dates and have added in an extra special home-town show.  Excited to get at y’all, hopefully in dryer conditions this time!” Joe Mungovan

Produced by Joe Mungovan, ‘A Flower In The Weeds’ features the singles ‘You + Me’, ‘Lemon + Lime’, ‘Soaking Up The Sunshine’, ‘Give Me Your Love’ and ‘Like That’. It was released on November 10 and mixed by ARIA Award winning producer/engineer Tim Carr (Matt Corby, Julia Stone) and mastered by long term collaborator Joe Carra (Courtney Barnett, The Teskey Brothers).

Joe’s debut album is one that has endured fires, floods, a global pandemic and love across international borders “December came and the fires started. I woke up one morning and could barely breathe as the smoke was so thick. I evacuated for a week and fortunately the fires just missed the house. I moved back down and then the valley flooded.  I lost power for 5 days and lived by candlelight. Summer passed and autumn arrived and the girl I met in Berlin flew to Australia to visit me.  She arrived one day before they closed the borders due to Covid.  We went on a road-trip up and down the East Coast and spent our days soaking up the sun-rays by day and drinking wine around the fire at night.  Unfortunately our time together was cut short when we found out that the pandemic was getting quite serious – the German borders were closing.  We turned the van around and headed back to Sydney Airport to get her on a flight home“  Joe Mungovan

‘A Flower In The Weeds’.

Joe’s added an extra special show “The Joe Mungovan Mum-lovin Special” on Mothers Day at a Spiegeltent in Kiama Harbour on May 8!

JOE MUNGOVAN ‘A FLOWER IN THE WEEDS’ ALBUM TOUR

Re debut album: “The result is a collection of songs that elevate the earnest, introspective songwriting that threads Mungovan’s earlier work, with tons of warmth and infectious indie-pop sensibilities throughout.”

“Song You Need to Know: Joe Mungovan continues his reputation as a fine purveyor of summer vibes with his latest breezy cut ‘Lemon + Lime”.

“Over the last few years, the musician has come forward as one of Australia’s most talented and remarkable, with a run of brilliant singles forming an exciting path to his second EP, Way Down South, in 2016, followed by his third, Another Night, A Distance From Here, in 2017.”

‘His warm lilting vocals coupled with catchy guitar riffs transport you to somewhere warm and tropical. The layered guitars are extremely effective, and it has a recurring bass guitar line that keeps the party going from beginning to end. “You + Me” has a wonderful optimistic feel to it”

“South Coast singer-songwriter Joe Mungovan’s newest release is the delicious sounding ‘Like That’ – a track infused with Mungovan’s indie rock-roots vibes as well as pop melodies to brighten your day.”

“Set to appear on his long awaited debut album A Flower In The Weeds, the song (Like That) brings the musicians staple slicked back production and captivating vocals, with catchy guitar riffs that will remain in your head all day long.”

Soaking Up The Sunshine: “Joe taking me far away, specifically to a tropical island with a cocktail served in a coconut and endless refills. ooooh yes thank you sir! 4 stars”

Soaking Up The Sunshine:  “Joe’s transported us somewhere tropical and breezy with this infectious new track. 4 stars”

Give Me Your Love: “The rasp and passion in “come lay your limbs next to miiiIIIIINE…” gets me every time! Agree with Perko, that sax! Sax = Swoon. You had me on first listen with this one Joe, very much here for it! 4 stars”

Give Me Your Love: “When your vocals come in at the 10 second mark, you well and truly had my attention. I agree with Declan and Dave, I can hear some Rubens vibes here, but those roots influences shine through a lot. The sax? Ooff. Great stuff, love this! 4 stars”

“This is an absolute triumph of a cruisy indie pop song. You’ve folded all these gorgeous elements and it’s all tied up with your lovely raspy voice. Love it man. 4.5stars”

Joe’s debut Album: A FLOWER IN THE WEEDS is out now.

Sónar Lisboa 2022 announces the final line-up of Sónar +D, an exploration of creative technologies within the festival’s framework