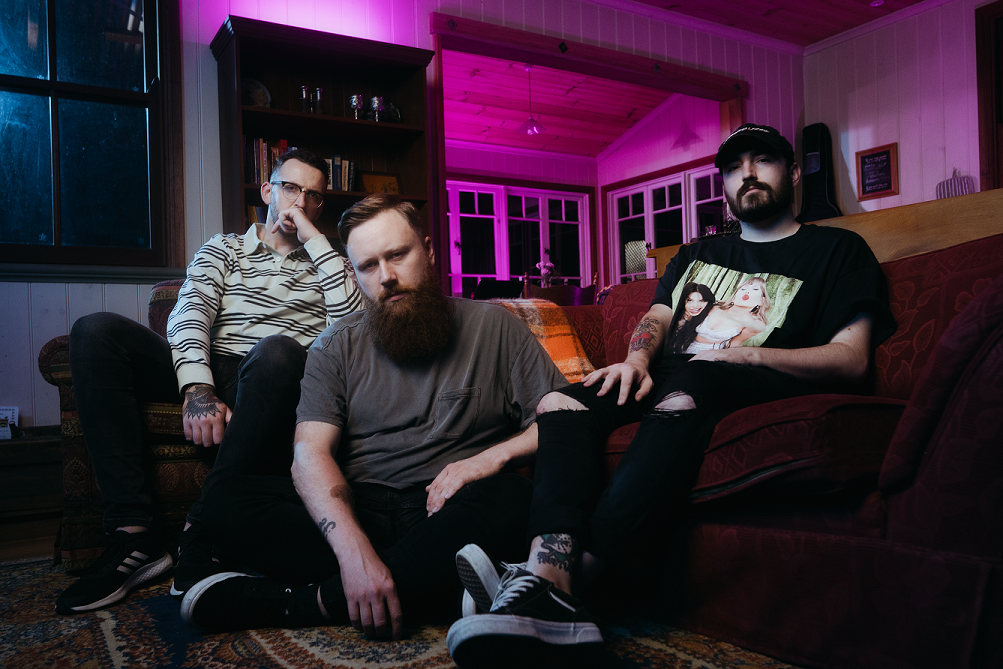 Each of us are a bit different, but we’re all self taught and picked things up fairly young playing  and learning how to write in bands and high school and just kind of snowballed from there. Our  bassist Rich moved to vocals after years of playing and fronted a metalcore band called The  Name Of A Ghost and Antony and I (Jordan) played together in a pop punk band called Malibu  Stacy for a long time before this project started to come together in early 2020.

What’s been happening recently for you guys?

Aside from the single release, we’re finally getting to play regular shows after live music being  so stop start from the time we started the band. It took a year from when we released our first  single Haunt to being able to play live due to lockdowns, restrictions and everything else. We

recently had the pleasure of opening for The Beautiful Monument and Belle Haven here in  Brisbane which was awesome.

Your latest single ‘Coffee Stains and Picture Frames’ is out now, what or who influenced  the sound and songwriting?

Rich had always wanted to write a song with a similar baseline to English Summer Rain by  Placebo, so we’d come to a writing session and he had the main riff and chorus chords as well  as the basic outline of the song with some cool space and dynamics ready to go. Between us  we came up with the lead guitars in the chorus and second verse which were very reminiscent  of Movements and their record No Good Left To Give, particularly the closing track and I think  my constant thrashing of that record at the time also inspired a lot of the flow and cadence of  the vocal melodies when we got to those after working together on the lyrics.

Where and when did you record/produce/master and who did you work with /How did you  approach the recording process?

We had spent a lot of time with our go to producer and collaborator Jake Randall (Joy In Motion/  Sol Audio) in 2020 and 2021 out of his home in Bulimba. We’d been working on the songs that  would become our EP Bury What’s Left Of My Heart In Your Backyard and had just never  stopped writing in between, so as those session went on it turned into us having 9 or 10 songs  going, this being one of them. Given how fun and easy it is to work with Jake and how he brings  out the best in us and has a great ear and mind for what we’re doing, we didn’t really have to  think twice on this one.

Please tell us about any future music that’s in the works:

We still have about 5 or 6 songs left over from those 2021 recording sessions which will see the  light of day in the near future. Because we had such a healthy backlog of song ideas that we  were excited about, we just recorded them and figured we would worry about a release strategy  later. Theres a few little bits and pieces left to do on those, but I would say a new EP won’t be  far away before we dive back into the myriad of demos we have new and old.

Rich is a new father to twin boys, Antony likes to hang out with his dog and suss new Coffee  spots and I can usually be found watching wrestling (AEW forever, WWE never)

All systems go! Plenty of new music, shows and we’re hoping to be able to cross state boarders  and see some of our old friends and favorite food spots in Sydney and Melbourne before the  year is out.

As a band that is two thirds Vegans, Netherworld here in Brisbane is the go to spot! Incredible  food for everybody’s lifestyle choices, great beers and sodas and everything from pinball and  gaming machines to board games. If anyone from Netherworld is reading, we’d love to play a  show. DMs are open. Oh, and also bring back the duck roll, thank you in advance.

KING BROWN bring a smooth swagger in latest single ‘MY LOVE’ A new era for the WA indie-rockers.