“This is a punk rock song to me and I think what I’m trying to say is that we are the only ones who can save ourselves. Kind of like how Bob Marley said “None but ourselves can free our minds” …At the same time I’m also saying that there are things in this world that are fucked beyond repair and the political climate in the USA in the lead up to the election only heightened my awareness on this. Our systems, our habits, the gap between the privileged and under privileged, suffering, warfare, greed, ignorance. We always look for external solutions but what will truly bring harmony? What a romantic thought.”
– Luke Yeoward on “Who Can Save Us Now”

After a successful career as the frontman of much loved rock act King Cannons followed by a long break from music entirely, 2017 sees Luke Yeoward back in full swing as an independent artist. Luke launched his solo career with a successful crowdfunding campaign that enabled him to create his debut album Ghosts over a month in the USA and the first single of the same name has been welcomed with open arms amongst the local music community. Since its release in February the title track has has received radio play on stations such as Double J and REBEL FM with the striking video also being added to rotation on ABC’s RAGE after it’s premiere on TheMusic.com. As well as securing an international support slot with Hellcat Records rockers The Interrupters Luke was also recently invited to perform an acoustic version of “Ghosts” in the RollingStone Australia office which you can watch here.

Inspired by the likes of Joe Strummer, Chuck Berry and Bruce Springsteen, Yeoward’s debut album opens with the fitting title track and serves as an explosive return for the Australian rock heavyweight. A tender, Dylan-esque organ softens the rampant guitar riffs and crashing drum rhythm while Luke’s nostalgic, signature tone steers the track into full force. Described by Luke as “a positive kick up the arse”, “Ghosts” lays the foundation for the rest of the album.

“’Ghosts’ is a reminder that anything is possible and anything can change. It’s never too late. The forgotten will be counted. In this instance, music is the instigator of action. It only takes a split second for something to happen.”  – Luke Yeoward explains

The album is a perfect mixture of everything that has influenced Luke Yeoward in his lifetime. From punk to reggae, soul to rock and roll, his vast musical passions have conceived a unique style which demands your attention.  Recorded in true classic style using vintage analogue equipment and straight to 8-track in LA with J Bonner (ex Aggrolites, currently Black Emeralds) and with only three-and-a-half weeks to record the whole album, Luke explained the process as the most fun and inspiring recording process he has ever been a part of.

To celebrate the release of a milestone in Luke Yeowards musical career he’ll be playing two very special shows. One in Melbourne, where Luke currently live’s with his family and the other on his home turf in New Zealand at Whammy Bar, Auckland. 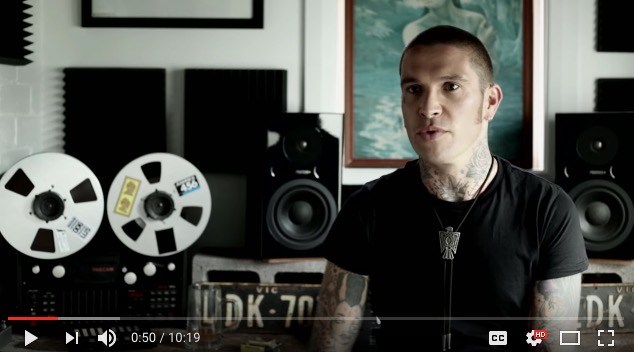 Luke Yeoward is a singer, songwriter, guitarist and producer based in Melbourne, Australia. Luke fell in love with music from a young age and taught himself to play the acoustic guitar handed down to him by his mother. His journey began as a street performer at just 10 years old and his musical river flowed through his teens and twenties, carving its way through several different projects, genres and countries.

His formative teenage years were spent in New Zealand where he cut his teeth on Punk Rock. In 2007 King Cannons was born, re-locating to the UK in 2008 then moving to Australia in 2009. King Cannons’ positive energy and disregard for musical boundaries lead them to sign major licensing, publishing and management agreements in Australasia. With singles on high rotation across national radio in Australia and New Zealand, King Cannons released their debut S/T EP in 2010 and full length album The Brightest Light in 2012. The band played festivals such as the Big Day Out, Blues Fest, Nz Homegrown, Pyramid Rock, Peats Ridge and toured across Australia, New Zealand and Europe withThe Living End, Bedouin Soundclash, Shihad, The Broilers and more.

After years working blue-collar jobs with his nose to the rock and roll grindstone, Yeoward began to feel a dark cloud looming over his creative life. Frustrated, disheartened and in debt, Luke pulled the pin on King Cannons. Despite his attempts to launch other projects, for the first time in his life Luke was completely burned out. Soon after, Yeowards record label EMI changed ownership and dropped him from the roster. He threw in the towel with music altogether. With a new baby on the way, Luke moved his family back to New Zealand, only to realise that unskilled work in NZ would only offer a worse financial strain.

After only a short few months, he returned to Melbourne with a newly lit musical fire in his belly. Becoming a father solidified the importance of music. He wanted to be a positive role model that exemplified the importance of passion. With a refreshed outlook and new excitement, he began to make music again.