BEN: Ibiza. We’ve been there for about fourteen years now. I am very happy with my address!

LAURA: Rather lucky to say Ibiza 🙂

Recently you have been touring across China and Malta, how was your experience with travelling and organising shows through both?

BEN: To be honest we don’t have much to do with the organisational side of things. We are blessed with an amazing management team who basically take care of everything which is great! I really enjoy the travelling aspect; meeting different people and seeing different places all the time is a massive blessing.

LAURA: Like Ben said, usually the organizing is taken care of by our amazing management team at Mamboland Agency. I love the travelling but at the same time it can be pretty exhausting when you have a few consecutive gigs in a row, each in a different country. I always say the travelling is what we get paid for – the playing is the fun part!

What equipment / programs do you use when playing live and recording?

BEN:  We don’t really use loads of equipment and software when we play live. It’s quite simple; Laura’s sax has a microphone and that signal gets mixed with the what I send out of the DJ mixer, and voila!

LAURA: The saxophone for me is a fairly vital part. 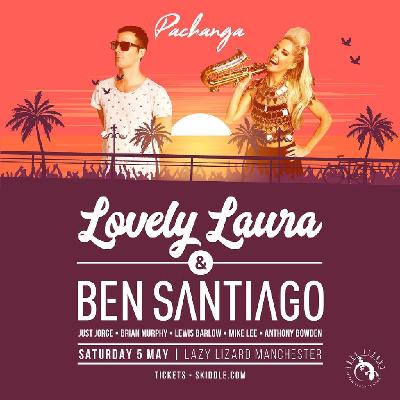 How did you start playing music and how did Lovely Laura & Ben Santiago form?

BEN: I started DJing as a hobby in my early teens, but it was only much later in life that I decided to have a go at making my passion my profession. Further down the line Laura and I met in Ibiza, and we were both working individually so as the relationship blossomed, the inevitable happened and we decided to join forces professionally too. Being husband & wife, we found the dynamics worked really well and it just went from there to be honest. Secretly I think Laura really liked having a DJ she could tell what to do, so she decided to make me her bitch!

LAURA: Ben has pretty much explained the story, however for me I had just completed a BA in Jazz at Leeds College of Music and was having fun jamming with DJs over house music. Hed Kandi brought me to Ibiza where I met Ben and the rest is history!

You’ve been busy this year playing huge Ibiza sets, how did you prepare for each show?

BEN: We’ve been playing together for long enough now that I can get a good feel for tracks that work well with the saxophone. There has to be space in the track for Laura to play, but more importantly it has to be something that Laura can vibe off. Therefore, what tends to happen is I send any potential tracks to Laura, and if she gives me the thumbs up, I add them to the playlist for our live sets. Then when we play out, I choose tracks from the playlist according to what the crowd is reacting to. This formula works well because Laura can be confident that I am not going to play anything that doesn’t work or she doesn’t know, but at the same time we keep our sets fresh and different with each performance.

LAURA: Good answer Ben! I can’t really add to that. He’s pretty good at this isn’t he?

What were the highlights this year in Ibiza?

BEN: Playing at the Hï Ibiza opening party with my Melon Bomb brothers. It’s the old Space Ibiza and this was the first time the new renovated club was being revealed to the world, so it was a really special night.

LAURA: There have been some incredible moments this year but playing the Amnesia terrace for Cream after Fatboy Slim is way up there!

BEN:  We have some big changes planned for our Ibiza summer season, breaking the mould of previous summers and starting to spread our wings a little more including a massive new residency at Ibiza Rocks!

LAURA: A change! We want to become a lot more creative with our sets whilst also incorporating much more original material. We have some writing sessions planned and all being well we will be releasing some new tracks throughout the year. Our Ibiza gigs will also be a little different from the last few years so big changes ahead!

You are performing regularly with Dolce & Gabbana, how did this come about?

BEN: We were booked to do a villa party in Ibiza for Eva Herzigova and one of the guests saw Laura playing and just fell in love with her. He came and spoke with us and explained he was from Dolce & Gabbana and asked if he could book us. We gave him a card and said to get in touch, but when he left he came and said goodbye and reminded us once again that he was from Dolce & Gabbana. Him saying it the second time made us wonder if he was someone important so when we got home, we searched the brand and it was only then we realised we were talking to Dominico Dolce! He booked us to do his nephew’s wedding in Italy which went really well so he then asked us to do Milan fashion week for them. After that they sent us around the world playing in various different countries throughout Europe and Asia donning it up in Dolce & Gabanna clothes and being spoilt rotten. You couldn’t make it up some of the things that happen to us.

BEN: Loads of stuff for me. My favourite DJ is Luciano but I also love loads of other types of music. To be perfectly honest, what influences our sound when we play is whatever the crowd is reacting to at the time!

LAURA: My initial roots are in Jazz. From a very early age I was listening to Ella Fitzgerald, Stan Getz, Frank Sinatra, Paul Desmond, Duke Ellington – the list goes on! I then discovered Stevie Wonder, Randy Crawford and the sax player David Sanborn and became addicted to funk, soul whilst also loving good pop music. I think all of this has influenced my sound over the years but ultimately, I have to play from my heart so the music really does need to move me.

BEN: Bambuddha is always a great night out. We’ve also just discovered a great grill outside Ibiza town called Can Costas. All their food is organic and it is a really cosy, welcoming spot.

LAURA: In Ibiza for me it has to be the Fish Shack in Talamanca. It’s only open in the summer but it really is the best spot for unwinding by the sea in a rustic setting whilst eating their freshly caught fish. Perfect!