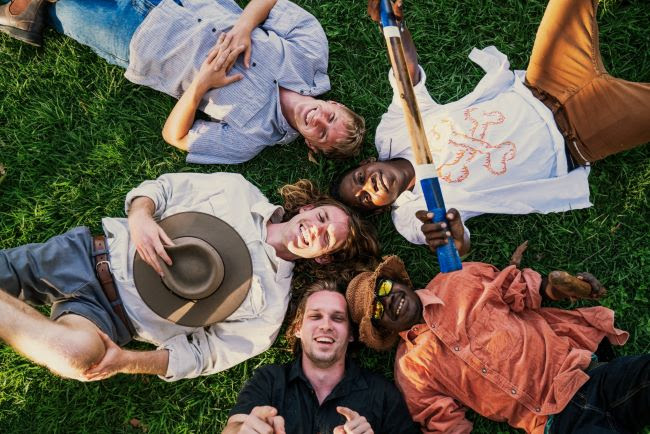 Still buzzing from a run of sold out headline shows, King Stingray are determined to keep the vibes high with a brand new single, Camp Dog.

The band’s fourth single is an endearing tribute to the cheeky canines that patrol the streets of Yirrkala, the town in North East Arnhem Land that King Stingray grew up in.

“The community camp dogs act like the boss of the streets” explains guitarist Roy Kellaway. “Kids often have to walk the long way home to avoid them. But it’s not about fear. It’s about our adoration of the character and personality of the community dogs and their funny traits. Flea-ridden, cane toad-lickin’, fish carcass-eating camp dogs. We love them, and this is a story of our life with them.”

Camp Dog follows on from bona fide hits Milkumana and Get Me Out which both made their way into triple j’s Hottest 100 at number 56 and 46 respectively.

Maintaining their mammoth momentum, King Stingray have been hand-picked to support Midnight Oil in Sydney and Cairns, and invited to join several dates on the massive Ball Park Music tour throughout June and July. Expect incredible performances at Yours & Owls, Strawberry Fields, Parrtjima and Splendour In The Grass, too.

With the band now pulling into international focus via their nomination for NME’s Best New Band In The World, 2022 truly is shaping up to be the Year of King Stingray!