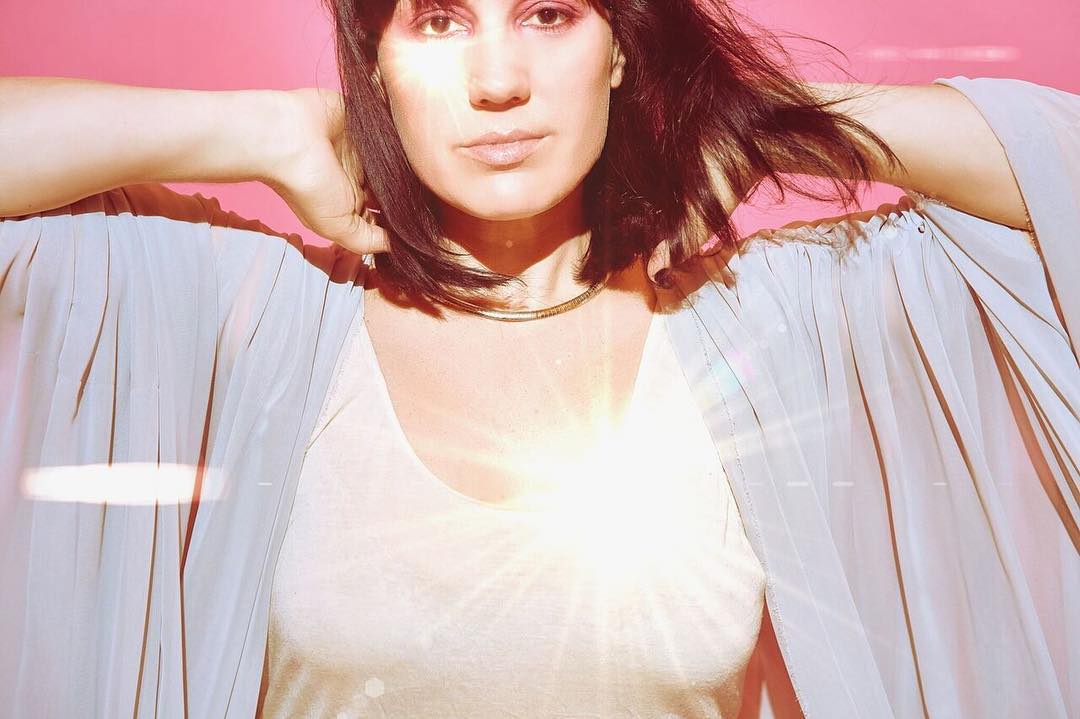 What is your name and role within Kids At Midnight?

My name is Jane Elizabeth Hanley and I am the Singer, Songwriter, Engineer, Producer, Mixer, Record Label, CEO…lol yeah it’s just me.

I’m based between Brunswick and a little country town on the coast Cape Paterson where I grew up. I split my time fairly evenly. I romantically can’t let go. I’m just a small town girl.

I was always singing and dancing at dance school since I was a little girl. I played saxophone in the high school band in year 7 but you can’t sing with a sax in your mouth so I stopped… I kinda wish I hadn’t! But I knew I wanted to write songs so I bought a cheap second hand guitar when I was 16 and taught myself to play by watching Oasis videos.

You’ve recently released a single ‘By Your Side’ what influenced the sound and songwriting for this track?

It’s pretty unashamedly 80s. I’m someone who wears her musical influences on her sleeve. But the sound of a John Hughes soundtrack…the twinklie-ness of the final scene of an 80s movie, it’s just an unashamed romance that’s not cool anymore… that’s what I dig so that’s what I made.

How has ‘By Your Side’ been received by fans and critics?

I’ve had some really lovely messages from fans about it and Dec Byrne’s Unearthed review was pretty perfect he said, “swaying with my high school crush under the disco ball at the end of the year dance to this…” it’s like he pulled the mood file from my brain! So I think it’s being received well! As much as you can really know.

Jack Rivers album is too sick for words. Haim and Phoenix will always be on rotation with me. And then my classics on rote. Heart, Tom Petty, Fleetwood Mac, Spandau Ballet… I run a Saturday night called ‘I Wanna Be Adored’ which is basically like a Bluelight Disco for adults, it’s all nerdy pop from all eras but it’s like the most amazing night. So I’m always inadvertently listening to the best songs of all time lol

If I’m at home I’ll jump on Ableton and start playing something on the keys or guitar, sing a long in gibberish until it starts to take form or story. Or if I’m driving (things come to me a lot when I’m driving to the coast) I’ll record little voice memos of lines or melodies.

You have an album coming out in 2019, can you please give us an idea of what to expect?

The album is a dreamy indie synth soundtrack to a movie that you can’t remember seeing but you somehow know. I hope it sounds like driving around the coast road in a thinking of the one you can’t have, LA nights, small town summers and slow motion 80s romance.

It’s all recorded in my spare room. I call it the ‘studio’ but my boyfriend also has his computer in there so we have to call it the ‘Studio/Gaming Room’ but that’s just to be nice. He has a little corner.

I hear that you wrote, produced and engineered / recorded the whole album yourself, why did you choose to do everything yourself?

It’s a combination of things. The fact that I can is one. It gives me time to fit recording in with my everyday life but also money is a big thing for an independent artist. I’m one person so the cost of an engineer, studio time, producer, mixer is a little scary. So I did it all myself.

How and where did you learn the skills to write music and also produce and record?

In terms of songwriting think you learn over your life of listening. I wanted to write pop songs ever since I was little but I couldn’t, I didn’t play, so once I taught myself what chords were I just ferociously went at it. Songwriting is a luxury I don’t take lightly. In terms of recording, my brother and I went halves in a Tascam 4 track tape recorder in 1997. I tried as hard as I could to record little demos on that but really some years went past, I was in an electronic duo and the guy did all the producing. We got really into it and then he decided to not do music anymore and I was kind of like, “nnnoooooooo what am I going to dooooo??!” And then after a week or so of feeling sorry for myself I just thought, “ Well you’d better learn to do it yourself then hey!” And I got Ableton, watched the Tutorial CD over and over and just tried and failed until I was making things that sounded ok. Then the next thing sounded a bit better. And that took about 3 years until the first thing I released sounded really good.

I used Ableton (bless, saved my life) a Mac, Universal Audio Apollo Twin Duo, a Shure sm7b I’ve had for 7 years I bought because it was the mic Michael Jackson recorded Thriller on, midi keyboard, a Squire Strat because I can’t afford a real Strat and my Taylor Semi Acoustic.

Triple J has been showing you a lot of love, what do you think it is about your music the resonates so well with so many people?

I really don’t know. I don’t think you can know why people like your music. I’ve had some people mention similar things that they can immediately picture themselves in my songs like a movie, I write pretty cinematically, and that’s what I want people to feel., I used to exist solely to consume movies. I’ve always been a daydreamer. Pretending I was this character or that character so maybe, hopefully, that has switched to my songwriting.

You’ve had 2 million Spotify streams to date, how has this massive exposure helped to propel your musical career?

Spotify plays have exposed my music to so many more people than I could have myself. And people all over the world. It’s just opened up the net of people that would’ve heard my stuff. It’s helping with the album and the prospect of touring in the future because you can see where people are listening to there’s some cool stuff coming up. It’s also allowed me to do some mentoring to learning Producers with The Art Centres ‘Operator’ Series, which is pretty cool because when I was learning I felt like I didn’t have anyone to ask, so it’s been really awesome to be able to help other female and female identifying producers who are starting out.

Your previous single was synced with MTV’s infamous Jersey Shore, how did this come about?

That was a while ago. It happened from MySpace! That was when Rich (we’re still great mates) was in Kids At Midnight and we wrote these little electro pop gems and we got a message from the MTV Music Licensing Department and we were like, ‘Yeah right…SUUUUUURE you’re from MTV.’ But it turns out she was. And we signed and the track is on Season 3 and it comes up on the screen and I will always think that is so cool.

The album is out early in the year along with the second single so I just can’t wait for that! I’m completely busting! I’ll be doing a little tour for that. I want to go back to LA for a bit and write for other artists too, so I’m constantly writing tracks. I also want to release other artists on my label.

Well I work as a DJ and a Dance Teacher so I’m never really away from music. But when I’m away from music I just want to sit near or IN the water and have some bevies with my mates and tell jokes and get up to shenanigans. I write a lot and have just gone back to tinkering with screenplays I’ve written in the past. Apart from 80s movies I also am a bit obsessed with British historical documentaries (I’m so cool)