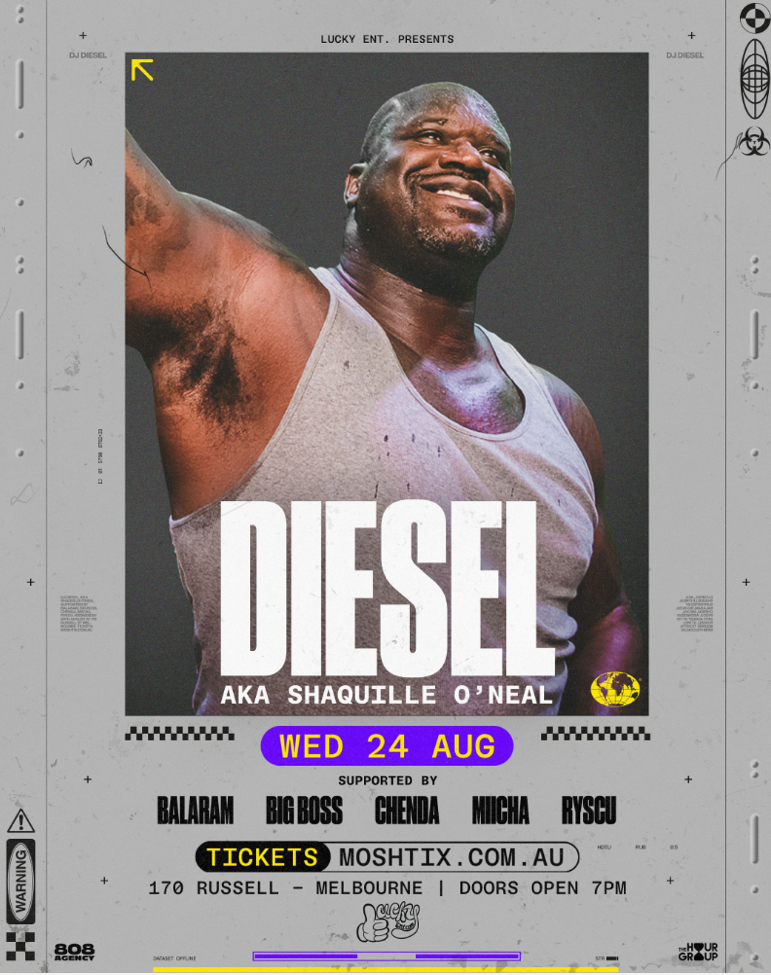 Shaquille O’Neil, the NBA megastar and business mogul will be making his way to Australia later this month for a series of speaking events and exclusive appearances in Sydney and Melbourne.

Shaq, who performs under the moniker, DJ Diesel is also confirmed to perform an exclusive DJ set at Melbourne’s stylish nightclub, 170 Russell on Wednesday 24 August presented by Lucky Ent. Tickets are on sale now at www.moshtix.com.au

He is no stranger to the stage, having performed at high profile events such as the U.S Formula 1, he has made guest appearance at international music festivals such as Lollapalooza, Tomorrowland and Imagine as well as creating ‘Shaq’s Fun House’ event in Los Angeles during Super Bowl Weekend.

Although DJing is a relatively new pursuit, O’Neal claims to have been DJing in some form since the 1980s, when he was a student at Louisiana State University and has released

multiple studio rap albums in the 1990s including his debut album ‘Shaq Diesel’ in 1993. The album went on to achieve double Platinum certification in the United States. Being a DJ is one of Shaq’s true passions and he’s excited to bring his live set to Melbourne!

O’Neal’s highly anticipated return will be his first visit to Australia in over 20 years and is proudly presented by Australian Basketball Players’ Association and The Hour Group.

“I’m really excited for this long-awaited tour to come to Australia! It’s my first time back in such a long time and I can’t wait to see you Aussies down under,” Said, Shaquille O’Neal.

The Business mogul, Hall of Famer and 4-time NBA championship winner will also appear at Margaret Court Arena in Melbourne on Thursday 25 August 2022.