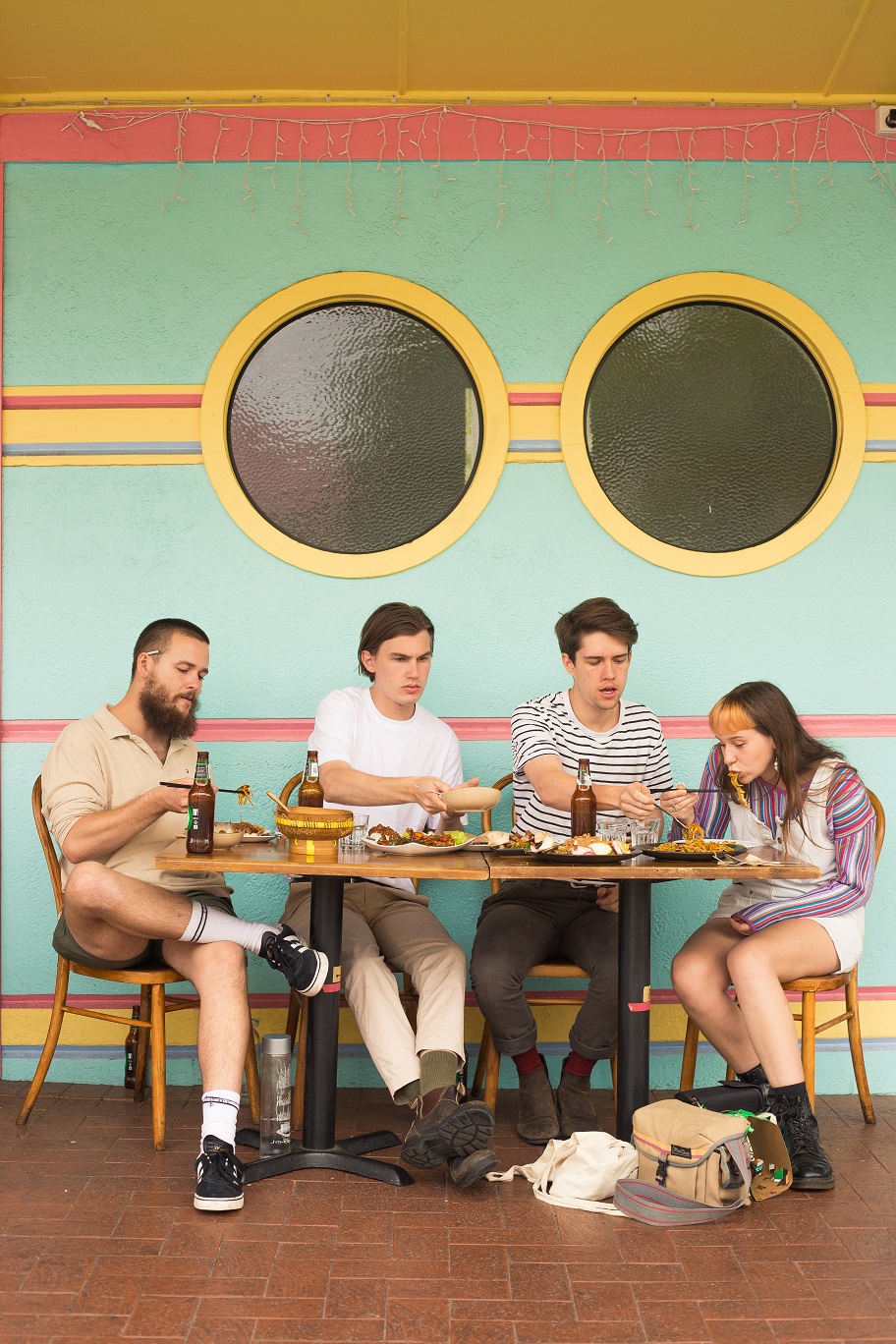 Brisbane’s Good Boy today return with their next politically-charged tune, ‘CRF’. The new single follows the band’s surprise track, ‘Sodabread’, which dropped earlier this month. The tracks offer up the first taste of Good Boy’s forthcoming debut album, due for release in the second half of 2019.

Having developed a loyal following through their often ruthless and always honest lyrical commentary on the world around them, Good Boy continue this trend with CRF. As best put by vocalist Rian King, “CRF stands for nothing, not unlike all round dislikeable bloke and pig in a wig, the dishonourable Joe Hockey. This absolute scumbag spends tax payer money on fancy food and plonk. He is a bit of a shit political figure and has little backbone. Enjoy the song”

After expanding to a quartet with the addition of bass guitarist Marli Smales, Good Boy are continuing to produce their beloved Aussie-tinged punk sound, with as much attitude as ever. This time around

however, the new-and-improved Good Boy welcome a horn section, whipped up by talented instrumentalists Daniel Grima and Matt Luff.

To bring ‘CRF’ to life, Good Boy worked with producer Tim Morrissey (The John Steel Singers) on the track, with engineering and mixing by Aidan Hogg, and mastering by Mikey Young.

Good Boy are endearingly unstoppable crafters of political and quintessentially Australian punk-fueled tunes, and if the last couple of years are anything to go by, the quartet are here to stick around.

With their debut release ‘Transparency’ scoring a high rotation add on triple j in late 2015, the then-trio landed in the top 15 most played tracks on the youth broadcaster, kicking off what was to be a hectic and fruitful musical trajectory.

In January 2016, the band was announced as winners of the triple j unearthed Laneway Festival competition, opening the Brisbane main stage to a packed-out crowd. Their debut EP ‘No Love For Back Home’ dropped that March, clocking up a massive amount of love from critics and fans alike, and saw the band play to capacity crowds in Melbourne, Sydney and Brisbane on their EP launch tour. All within the band’s first year, they racked up supports with Viet Cong, Homeshake, British India, The John Steel Singers, Jonathan Boulet, Velociraptor, Palms, and Northeast Party House to name just a few.

Not ones to rest on their laurels, Good Boy released their sophomore EP ‘Plum’ in the latter half of 2016. Recorded with Cam Smith at Incremental Records (Velociraptor, Deafcult) and mixed and mastered by Mikey Young (Eddy Current Supression Ring, Dick Diver), the release marked a sonic evolution for the band from their first release. Lead single ‘Poverty Line’ followed in the footsteps of ‘Transparency’, with an add to triple j high rotation and satiating the appetites of Aussie youths across the country with its relatable millennial charm.

After touring with Japandroids and ending 2016 in style playing Festival Of The Sun and Falls Festival, Good Boy went from strength to strength in 2017. Stepping out on tour with fellow Brissy rockers The Creases, playing a national sold out tour with Skeggs, and opening for Grinspoon on their 20 Year Anniversary tour of ‘Guide To Better Living’, as well as playing Splendour In The Grass and Yours & Owls festivals, last year saw an impressive expansion to their ever-growing resume.

In 2017 Good Boy also released a split 7 inch with Melbourne wunderkind Jarrow, featuring the trio’s brand new single ‘Braap’. To cap off the year, Good Boy released their latest EP ‘Shirk Life’ through Barely Dressed Records; a poignant look at life an early 20-something year old living in Brisbane in 2017. Weaving elements of humour and politics with the band’s unwavering maturity and millennial sensibilities, ‘Shirk Life’ saw the band release their most affecting record to date.

This year, Good Boy have made some changes. Punters can expect a brassy horn section meandering throughout new tunes, kicking off with surprise track ‘Sodabread’, and latest single ‘CRF’ as well as the introduction of fourth member Marli Smales on bass guitar. Teasing an extended release due out 2019, keep an eye out for the good things Good Boy are working on.

NEVERSEA 2019, the biggest festival on the Black Sea shore – NEVERSEA returns to Constanta on July 4-7 2019

Cream with a K