And Return With New Single ‘Marigold’

Out Via Moshi Moshi Records

International psych explorers Flamingods are back with brand new album ‘Levitation’ (3 May, Moshi Moshi Records) and have announced a run of dates including their biggest headline show to date at London’s Village Underground on 1 May. May album tour tickets go on sale Friday 17 January at 10am via https://www.flamingods.com

The first single to be unveiled is ‘Marigold’, a multi-sensory psych-rock trip that finds  Flamingods on hair-raising form even by their own exuberant standards. ‘Marigold’ oozes fun out of every pore, a perfect antidote to turbulent times.

‘Levitation’ is inspired largely by the disco, funk and psychedelic sounds coming out of the Middle East and South Asia in the 70s, the album channels these influences through a vision soaked in mysticism, positivity and sun-drenched imagery.

During the process of writing and recording ‘Levitation’, Flamingods found themselves living in the same continent for the first time in four years and it’s this new unified feel that defines the confident and eclectic sound of the album.

‘Levitation’ is the follow-up to Flamingods’ breakthrough 2016 album ‘Majesty’and follows the ‘Kewali’ EP for Moshi Moshi and a one-off release with Dan Carey for his Speedy Wunderground singles club in 2017. During this time, they’ve performed live sessions at 6Music (with Gilles Peterson & Lauren Laverne), KEXP, Boiler Room and travelled the globe spreading their exotic psychedelia to the masses, getting people dancing from Austin to Amsterdam.

The band will be taking their incendiary live show to venues around the UK in April and May in support of the record, as well as a one-off-date supporting Omar Souleyman in Bristol January 31st.

27 April – Are you Listening? Festival, Reading

8 May – The Exchange, Bristol 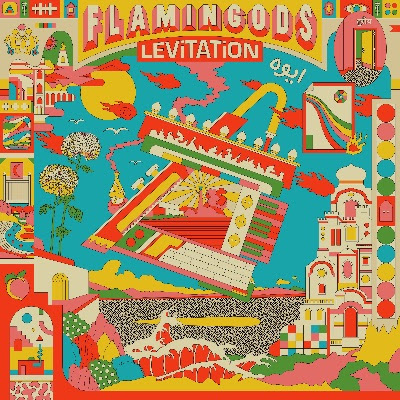