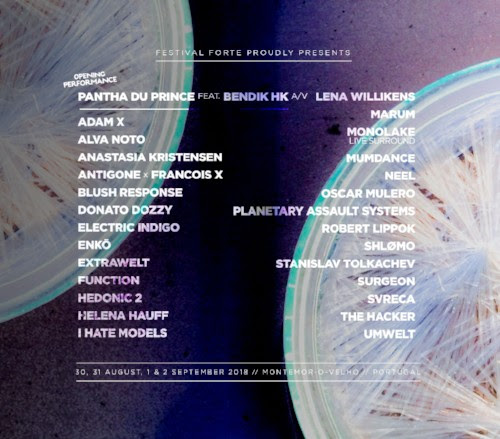 These are added to the already announced: Anastasia Kristensen, Antigone x Francois X, Blush Response, Donato Dozzy, Electric Indigo, Extrawelt, Function, Hedonic 2, Helena Hauff, I Hate Models, Lena Willikens, Monolake, Mumdance, Neel, Oscar Mulero, Pantha Du Prince ft. Bendik HK A/V, Stanislav Tolkachev, Surgeon, Svreca, The Hacker and Umwelt.
There are no words enough to describe the importance of Carsten Nicolai aka Alva Noto in the electronic music scene. Co-founder of the much respected Raster Noton label together with Olaf Bender aka Byetone and Frank Bretschneider, he is the pure example of how science can combine with art through audiovisual language. Together with Ryuichi Sakamoto, he composed the soundtrack for the acclaimed movie “The revenant” and in 2018 he released the album “Unieqav” on his new label Noton. At Festival Forte, he will be presenting his new spectacular show, which is an incredibly intense audiovisual experience that will take place inside the immersive castle walls. Robert Lippok, who will release his new album in 2018 onRaster Noton, will also present his new audiovisual show at Festival Forte.

Luke Slater will return to the castle, this time with Jaygo Bloom, who is the curator of the generative garden of the festival. Together, they will present the only Planetary Assault Systems show of the year, an exclusive audiovisual performance that will have a very special setup.