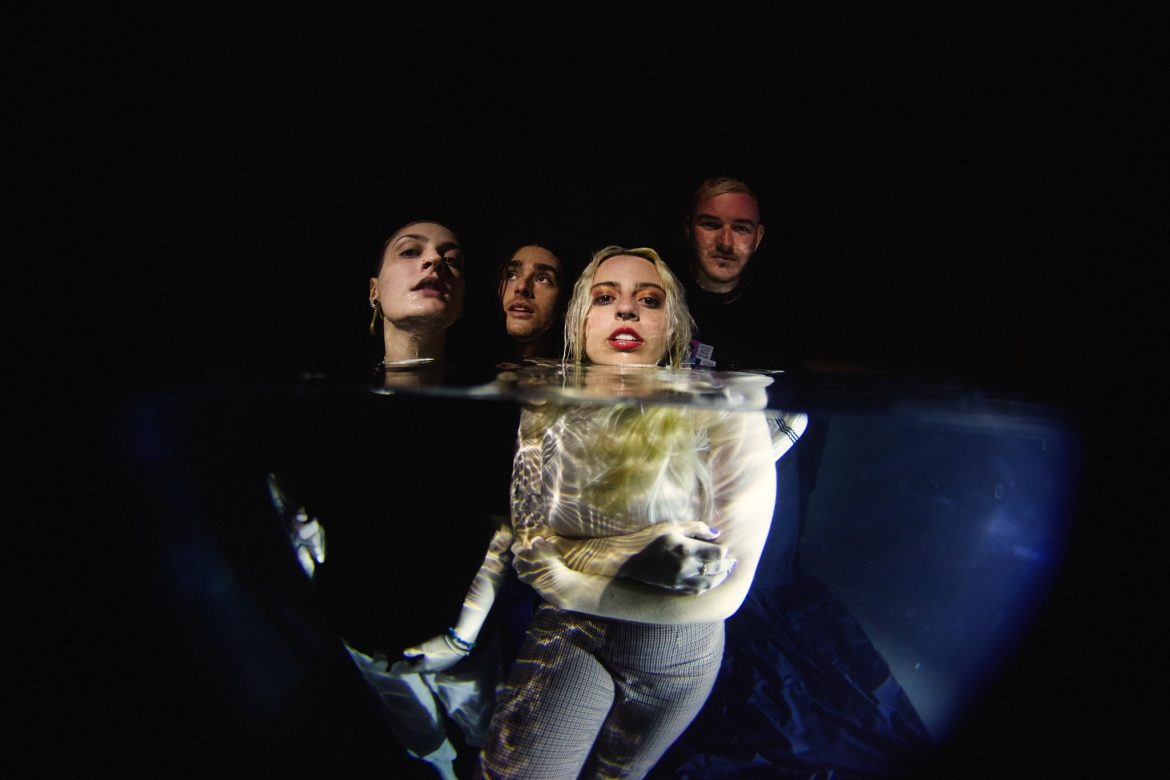 Where are you currently based?
At the moment, myself and Kurt are based in Pottsville, NSW and Ruby and Tex live in Brisbane, QLD. We’re about 2 hours drive away from eachother.

How did you first start playing music?
For me personally, I always wanted to be a singer. When I was a kid my sisters and I were obsessed with playing Sing Star, every weekend we would be doing it. When I was probably 10 or 11, I started to be more interested in bands (rather than just listening to Avril Lavigne on repeat), and the first band I fell in love with was Coldplay. I got tickets to their concert for my 12th birthday and it was the most inspiring core memory for me and still one of my favourite concerts to date. Ever since then, I knew exactly what I wanted to do – be in a band like Coldplay, tour the world and write songs. I remember learning singing and bass guitar in school, and then eventually teaching myself to play guitar so I could write songs.

What’s been happening recently?
We’ve just released our new single ‘Give You Everything’ plus a Y2K inspired music video to go with it. We’ve also announced our debut album ‘Now And Then’ which is coming out May 20th. We’re super excited to finally be able to talk about it, we’ve been working on it for so long now!

You’ve just released your single ‘Give You Everything’ what influenced the sound and songwriting?
This song came to life in early 2020 whilst we were in LA having a writing session with Sarah Aarons and John Hill. The ideas behind the song were inspired by both Sarah and us (Kurt and I) having similar experiences at the start of our career in the industry, which was essentially having people walk over you and take advantage of you because you’re young, naïve and still figuring things out. I think the core message of the song is that you can’t always give someone everything – you have to keep something for yourself. Sonically we straight away knew this one was going to have our 90’s/Y2K influences shine through, which our producer Kon Kersting was able to bring out whilst we were recording the song. We didn’t know it at the time we were writing it, but ‘Give You Everything’ was really the pinnacle of our debut album – thematically, lyrically and how we imagined it sonically. It was kinda the start of the new E&TD era.

How did you go about writing this track?
We had a writing session planned as I mentioned before with Sarah Aarons and John Hill at John’s studio in Los Angeles. Kurt had come up with these really interesting chords on the tour bus before we had arrived in LA, and he thought it would be a cool idea to bring them up in the session. Writing with Sarah and John was incredible, they had so many amazing ideas for the chords and after a few hours we had written and demoed an acoustic-style demo of the song. We were so stoked with it already, even though it was just the bones. When we were forced to come home in 2020, Kurt and I decided to turn our two-room tiny house into a studio where we could fully immerse in writing songs. We knew we wanted to keep working on ‘Give You Everything’, with some more guitar parts and a bridge and things like that. We had put together a more fleshed out demo, and sat with it for a year before we headed into the studio to record it for the album.

Where and when did you record/produce/master and who with?
The album was produced and recorded by Konstantin Kersting, who is a friend of ours and we’ve worked with him for the majority of our releases. It felt really good to be able to do our debut album with him. We did the drums and some of the bass tracking at Airlock Studios and the rest of it at Kon’s studio, both in Brisbane. Some extra parts were also put in at our home studio in Pottsville. The album was also mastered by Leon Zervos at Studios 301 in Sydney.

How does this single relate to the rest of the album?
‘Give You Everything’ was definitely a pinnacle point of the album thematically, lyrically and how we imagined it sonically. We really loved the nostalgic vibe to it, and we wanted to explore that concept more – which we ended up doing for the entire album. It was really difficult when we came home from the US due to COVID – there were a lot of mental health barriers we had to overcome, and using nostalgia in our songwriting was almost a form of escapism for us at that time. I think that’s why a lot of people can relate to it, because I think we were all wishing to be in a different time at that stage of life. The single really did trigger a lot of the common themes, and eventually the album title ‘Now And Then’.

How did the concept for the music video come about?
I remember listening to the demo of the song with Kurt shortly after it was written, and it’s a common thing for us to talk about initial thoughts on visuals and colours and things like that pretty early on in the piece. Kurt was talking about the idea of a high school day dream scene, which we both agreed would go along so well with the song. Once the song was recorded and it came time to actually start planning the music video, Kurt had created an entire vision board of scenes like playing in a high school hallway, going to a party in a limo, and having animated versions of us inspired by Lizzie McGuire which was a show all of us watched all the time as kids. We asked director Nick Maguire to work on the project with us, and it was amazing to see how he was able to turn all of Kurt’s ideas and concepts into reality – including shooting the entire thing on film!

Where and when did you film?
We filmed the video at the start of the year at a few different locations. The bedroom scene was at our stylist Zoë’s place, she had just moved in so we were lucky enough to be able to re decorate her room for the scene. The school scene was actually my old high school, my old art/photography teacher was nice enough to help us get in on a weekend and shoot for a few hours. It was kinda weird to be back there but cool we got to do the video there. It definitely had the Y2K high school corridor style we were looking for!

Who did you work with during the creation of the film clip?
We worked with Nick Maguire for the video. He directed it, and really helped bring the entire vision into reality. We’ve worked with him for previous videos like ‘YOU’, and thought he would be the perfect person to understand the vision and bring out the ideas that we had in our brains.

What did you find most challenging and rewarding during the process?
I think the hardest thing in general putting the song together was finding motivation when our mental health wasn’t at it’s best. It was super tough. It felt like there was nothing going on but also an overwhelming amount of things happening, which is really a strange feeling. Once we had recorded the album, we were all in a not perfect but much better headspace, and COVID was still making it difficult to organise things – especially since Kurt and I were living in a state that was closed off to QLD where Ruby and Tex live. That was so hard to navigate, but we always found a way to make it work.

Who are you listening to at the moment?
At the moment Kurt and I have been listening to the new War On Drugs album. It’s so amazing and we always have it on in the car, it’s super inspiring for us as songwriters. We’ve also being loving the new Pinegrove record and Holly Humberstone’s new EP.

What do you like to do away from music?
Personally, I’m really into art. I love doing it in my free time, and I’m always trying to think of new things I can create with it. I’m trying to practice stick-and-poke tattooing at the moment, which is fun. I also love playing my Nintendo Switch, it’s honestly my favourite down-time thing to do where I don’t have to think about anything!

What’s planned for 2022?
We’ve got our debut album ‘Now And Then’ coming out May 20th this year, which is super exciting and we’ve had it in the works for a little while now! We’re also finally going on tour with our friends The Vanns, then heading out for our headline shows across Australia before heading over to the US for Bottlerock and more. We’re just excited to be able to play new music to everyone, and also leave our bedrooms to be honest haha.

Favourite food and place to hangout?
As a band, we actually always go to Guzman Y Gomez after rehearsals every week. It’s just a thing that we always do, because it’s so good. If we aren’t hanging out at a food place, we’re always at Pedal Empire in Brisbane!