Having celebrated their 21st year as a musical collective in 2018 with the release of other critically acclaimed album Lab Experiments Vol. 2, Cookin’ On 3 Burners continue to evolve their late 60′s/early 70′s inspired soul sound, bringing dirty breakbeats, screaming Hammond Organ and gnarly twanging guitars to eight brand new cuts. On stage with resident vocal dynamo Stella Angelico, the Melbourne outfit is on the top of their game and a must see live act.

Following sell out shows at Northcote Social Club for their ‘Warning’ single launch,Kastoria Music Club in North Coburg, a full house at their New Years Eve show with Vika and Linda Bull, and a blistering set at New Years Evie at the end of 2018, Cookin’ On 3 Burners are kicking off 2019 with a hometown show to launch Lab Experiments Vol. 2.  So, get ready to get your groove on and join them for a one night only Album Launch Party on Friday 23 February in Melbourne when CO3B will be taking to the Howler stage with Afrobeat and deep street funk genre blenders The Seven Ups and Australia’s very own hip hop pioneer and producer, DJ Peril. 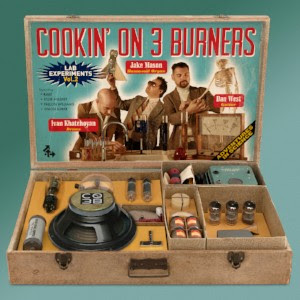 Praise for Cookin’ On 3 Burners
“Warning’ is one of the best songs of the week.” – Double J

“It’s a match made in soul music heaven between Cookin’ On 3 Burners and young gun, vocal powerhouse Kaiit. ‘Warning’ is a funky and joyous affair with grooves galore to get you up and dancing. There’s so much deserved self-confidence on this and it’s great to see both the band and Kaiit shine throughout.” – Steph Liong, 2SER

“A walloping blast of Aussie Hammond soul from Cookin’ On 3 Burners! ‘Warning’ cooks for sure, flavored with raw drums and some bold and sultry vocals by guest singer Kaiit.” – Dusty Groove

“Here’s a surefire uptempo heat rock straight off the pan from our favourite chefs of filleted funk Cookin’ on 3 Burners.” – 45 Live