THE CHATS RELEASE VIDEO FOR “OUT ON THE STREET” NEW ALBUM GET F*CKED OUT THIS FRIDAY! 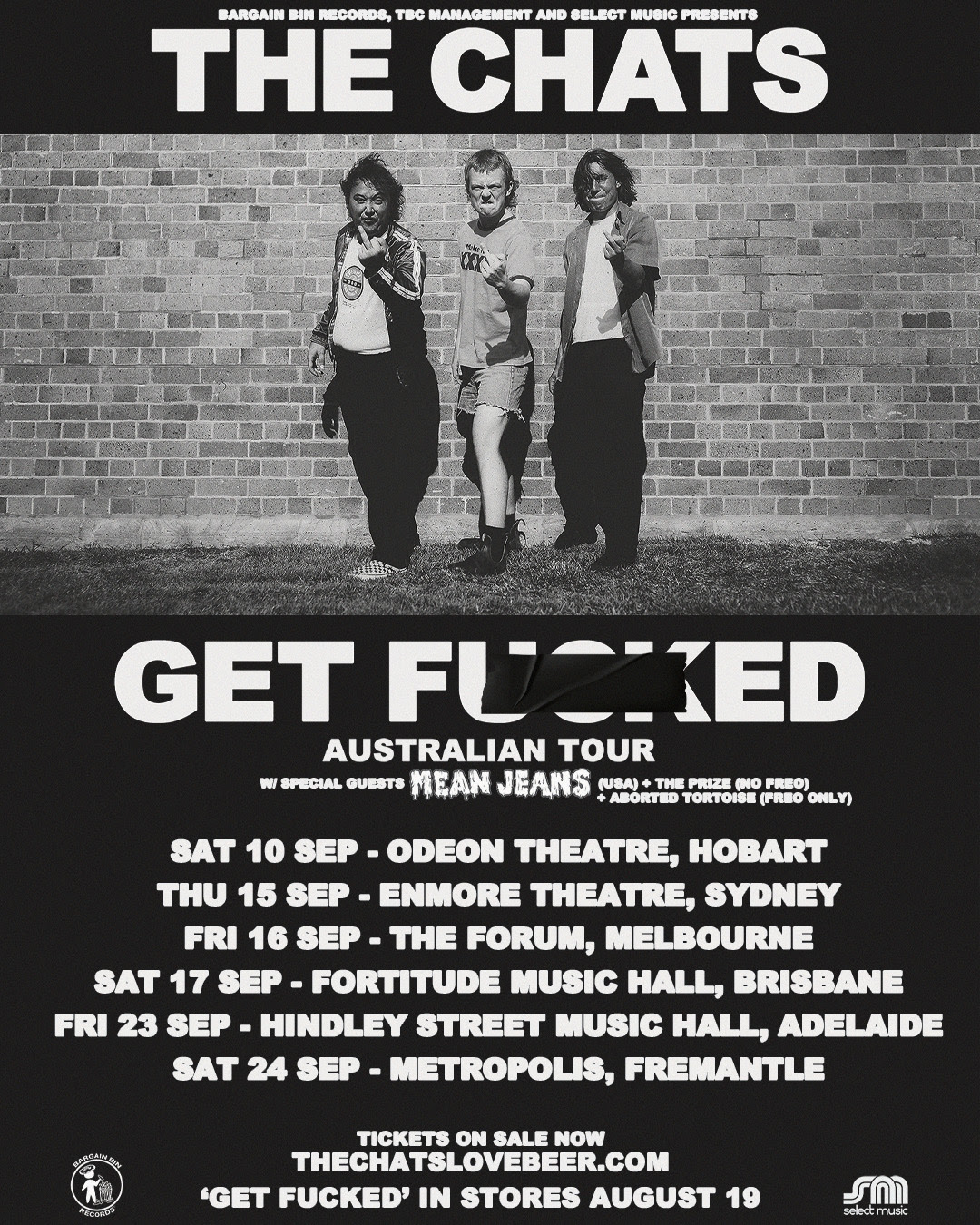 This Friday, The Chats’ rip-roaring, epic second album, unapologetically titled, GET F*CKED will be released on their own label, Bargain Bin Records, so today the band have released the final track, titled “Out On The Street” ahead of full release on August 19th.

The new video for “Out On The Street” features The Chats on the road smashing out their infectious, sing-along punk rock. The culmination of high-energy live footage was captured by Maclay Heriot who followed the band through their 2022 USA tour, with footage taken from Coachella, kicking footies in venue carparks, and a whole bunch of intense US shows.

The Chats have been touring throughout 2022 playing in front of huge crowds across many countries and Australia is up next with a whip around the country slated for September. Kicking off at the Odeon Theatre in Hobart on September 10 and winding up at The Metropolis in Fremantle on September 24, tickets are on sale now at www.thechatslovebeer.com.

Last month, the trio played their frenetic live show at Splendour In The Grass Fest in North Byron Parklands on home soil, where they thrashed through “Smoko” in front of a packed stage – the tune that pushed them into the ears of millions of online listeners at warp speed. Watch the live performance video here.

“Smoko” was just the gateway drug for a life of Chats dependence. Rather like The White Stripes’ “Seven Nation Army”, it started routinely enough, as the lead track on The Chats’ second EP, Get This In Ya!!, but since October ’17, when singer/bassist Eamon posted an accompanying video – which cost them just $5, for the sauced-up sausage roll snarfed on camera – it’s accrued a staggering 16 million YouTube views and counting, as well as enthusiastic props and radio plays from Elton John, Michael Stipe, Nick Cave, Iggy Pop, Josh Homme and Dave Grohl along the way.

Fast forward through to 2022 and The Chats are about to release their much awaited second album, GET F*CKED – an incendiary, hyper-adrenalized blitz from punk heaven, showcasing an electrifying all-killer-no-filler 13 tracks which perfectly capture the band’s explosive energy.

Pre-order the new album GET F*CKED at www.thechatslovebeer.com

THE CHATS
GET F*CKED AUSTRALIAN TOUR

THE CHATS RELEASE VIDEO FOR "OUT ON THE STREET" NEW ALBUM GET F*CKED OUT THIS FRIDAY!
0 comment 0 FacebookTwitterPinterestEmail