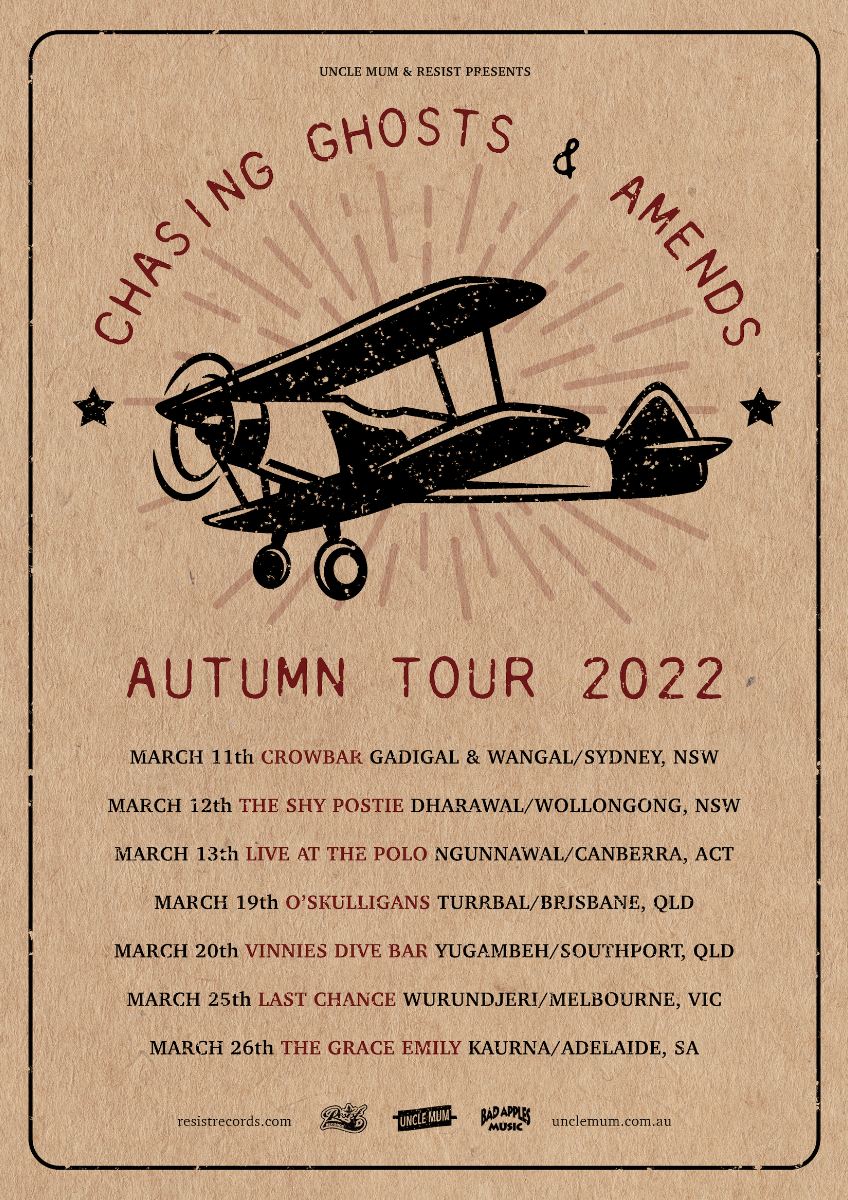 “I’m really looking forward to creating great memories with the good folks in Amends, our special guests but most of all our supporters!  I have a new appreciation for just how lucky we are being able to tour at present. Connecting with good crowds and music lovers washes away all this cynicism we’ve all endured. I’m grateful to have the opportunity to share Homelands with so many people in a really personal way! I look forward to everyone coming out to a show to say g’day!” – Jimmy Kyle – Chasing Ghosts

Sydney’s Amends released their sophomore album Tales Of Love, Loss and Outlaws in 2021 through Resist Records. The new album serves as the bands most consistent release to date.

‘It’s been roughly 9 months since our album launch show, after which we have had numerous tours cancelled. We cannot be more thrilled to be able to pick up where we left off and taking our latest record on the road. To be able to do it with the incredibly talented Jimmy Kyle of Chasing Ghosts is such a treat. We greatly admire Jimmy’s song writing and storytelling, so when the opportunity presented itself, it made complete sense to jump at the idea of doing the tour together.’ – Marcus Tamp – Amends

The track finds Jimmy Kyle singing in both English and, for the first time ever, in his native tongue as he explores the horrors of the 1856 Towel Creek massacre. The singer-guitarist delivers the song through the eyes of a grieving Aboriginal Elder, telling the story of “Baaba” (Babaang) Jack Scott as a baby; the lone survivor of the Towel Creek tragedy.  Incredibly, Kyle learned of a close family link to that Elder through a schoolyard incident when he was young.

WATCH THE VIDEO FOR SUMMER

’Summer’ on track to be one of the most powerful entries in their discography to date.” – Rolling Stone

“When it comes to addressing Indigenous affairs in the music scene, no one does it quite like Chasing Ghosts frontman Jimmy Kyle.” – Wall Of Sound

“Australia’s best new music for February…weaving English with his native tongue, and delivering a powerful punk song with sugary hooks and a thrilling momentum that belie the horrors of such a massacre” – The Guardian