To celebrate the release of Henryk Górecki: Symphony No. 3 (Symphony of Sorrowful Songs)performed the Polish National Radio Symphony Orchestra, conducted by Krzysztof Penderecki, Beth Gibbons has announced an international run of screenings of the film. Both screenings at London’s Barbican are now sold out. The Australian screening will take place at Golden Age Cinema in Sydney, tickets available HERE.

In anticipation of the release, watch a behind the scenes clip of conductor Penderecki discussing Gibbons’ process of vocal preparations ahead of the performance.

Watch the behind the scenes clip HERE.
Watch the trailer for the film HERE.
Read the interactive liner notes HERE.

Both an audio and film recording of the performance will be available worldwide on 29th March 2019.

Beth Gibbons is the vocalist, songwriter, producer and co-founder (together with Geoff Barrow and Adrian Utley) of the band Portishead and a solo artist in her own right. The album marks the first music from Beth Gibbons since 2008.

Henryk Górecki (1933 – 2010) was a Polish composer of contemporary classical music, believed to be the most commercially successful classical composer in recent times, with previous versions of his Third Symphony, Symphony of Sorrowful Songs, having sold over a million copies.

Krzysztof Penderecki has been hailed as Poland’s greatest living composer, and conductor.  His music was introduced to a wider audience through its use soundtracking movies such as The Shining and The Exorcist.

The film was produced by the National Audiovisual Institute, Poland and directed by Michał Merczyński. 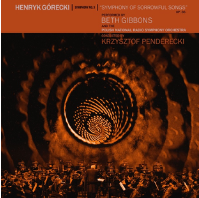 Pre-order:
Henryk Górecki: Symphony No. 3 (Symphony of Sorrowful Songs) Performed by Beth Gibbons and the Polish National Radio Symphony Orchestra Conducted by Krzysztof Penderecki will be available on deluxe and standard LP + CD plus a DVD, also digitally. Pre-order HERE.