With sophomore record Awake continuing to evolve into the game changer she had always threatened to unleash, Sydney singer / songwriter / producer / DJ Alison Wonderland is hitting the road for some of the biggest headline Australian shows of her career.

Set to dominate huge rooms in Brisbane, Adelaide, Melbourne and Sydney in November / December this year, the run comes hot on the heels of Wonderland’s recent slot as the highest billed female DJ in Coachella history. That set, and the hundreds before it, confirmed her place as a force on the world stage and a leading light in Australian eyes.

Three years in the making, Awake arrived on the back of a continuous wave of success for Alison Wonderland. Her debut record Run made her perpetually in demand party starter du jour. It came on the back of years of hard graft as she toured, remixed and DJ’d her way into the heart of worldwide tastemakers and soiree seekers alike.

With mixes for the likes of Ladyhawke, Little Dragon, Justin Bieber and Hermitude in her back pocket, she dropped Runonto a fanbase in awe of her multitasking mastery. Immediately hitting the top 10 in Australia, Alison Wonderland’s sets at festivals were must-see affairs.

Reacting to this building momentum by putting to use her myriad musical skills, Wonderland let Awake loose in April this year and has been applauded for an unexpected heart-on-sleeve approach.

With over 75 million streams to date and a #1 on Billboard’s Electronic chart, she’s proving that EDM can indeed have a soul and beating heart, the record is honest and uncompromising in its depiction of a young woman simultaneously at the peak and crossroads of a beautiful life.

Tracks like Easy and Awake burn with ambition and candour while still encapsulating the strong vibes and anthemic cadences that she’s known for. Meanwhile, singles Church and No scratch that burning itch to get lit.

On stage, Alison Wonderland is a force to be reckoned with, whipping audiences into fanaticism. Having sharpened her craft to perfection, the huge venues included in this tour will be the perfect church for her subjects to bow to the Queen of EDM. 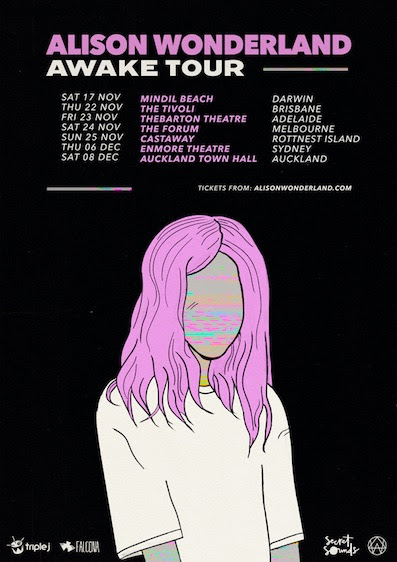